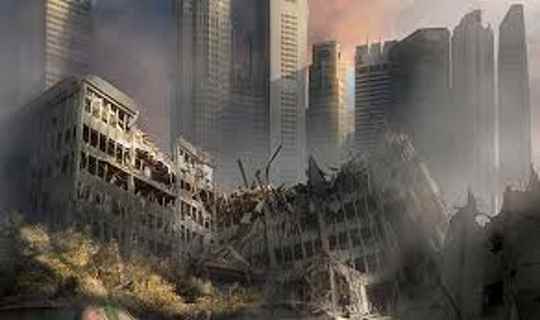 Here are 3 prophecies that agree with each other about the New Madrid earthquake that will split America, when America betrays Israel.

Joel chapter 3 tells us that the reason God will bring destruction upon the nations that surround Israel, is because they will split Israel:

RELATED : Protect Your Home and Family in an Emergency (Preparing for Earthquake, Fire or Terrorist Attack)

“1 For behold, in those days and at that time, when I restore the fortunes of Judah and Jerusalem,
2 I will gather all the nations and bring them down to the Valley of Jehoshaphat. And I will enter into judgment with them there, on behalf of my people and my heritage Israel, because they have scattered them among the nations and have divided up my land . . .”

A Self Sustaining Source Of Fresh Meat,Vegetables And Clean Drinking Water For Any Disaster

You should be aware that things are looking more and more like the Great Tribulation can start real soon, such as the birth pains of the earth that are taking place with record heat, record cold, droughts, floods, comets, asteroids, record tornado destruction, record fires, you get the picture.

Then we have the four blood moons coming in 2014 and 2015. And there are many people who are having dreams and visions of a tsunami hitting the east coast, which is described in Revelation 8, with the 2ndTrumpet. So it should be no surprise that the Canary Islands recently had an earthquake, and there are dozens of volcanoes around the world that are erupting. So the volcano on the Canary Islands could erupt in the very near future.

All of this fits together with what we expect to happen during the Great Tribulation, including what the prophet Sadhu Sundar Selvaraj predicted. Hosea says that the Jews will turn to God while they are suffering greatly, so it makes perfect sense that Israel will be divided and the Jews go into another diaspora. Zechariah 14 tells us that Israel will be invaded, 1/3rd of the people killed, 1/3rd will go into captivity, leaving only 1/3rd.

Here is the reference from Hosea:

I [Jesus] will go back to my place until they admit their guilt. And they will seek my face; in their misery they will earnestly seek me.” (Hosea 5:15)

This verse proves that the Jews will convert to Christianity before the return of Christ. There are other verses that prove this as well; see my book, Discoveries in Bible Prophecy.

What the prophet said fits with other things I believe will take place during the Great Tribulation. America will be weakened by the tsunami, but will be weakened even more by the split. This will allow the Beast to come up out of the Abyss (the 5th Trumpet), and World War 3 will begin (the 6th Trumpet).

But what might be the cause of the split in America? There are several different things to consider, one is between conservatives and progressive liberals, but there are liberals and conservatives in every state. The big cities have a high population of liberals, while the other areas of most states have the conservatives. So I do not see how there can be a split down the middle of the U.S. between these factions.

Obama is firing military leaders, at least 157 so far. He is purging the military of people who hold conservative values, or will not go along with his agenda. He has formed another federal police force designed to wage war in our own cities, has purchased 1.6 billion bullets, and 2700 assault vehicles which are not designed for warfare, but for urban war. He wants to confiscate our guns, and would have done so already if he thought he could get away with it. And he wants to make it illegal to criticize Islam. All this is looking very ominous.

Here are some possible scenarios: Suppose the tsunami takes place in 2016, it will wipe out the east coast, displace millions of survivors, and rebuilding will take decades. He could say that because of the tsunami, the displaced people will not be able to vote and so Obama could suspend elections, which would make him a de facto emperor.

Some of the military leaders may go along with it, but others may say, we will not allow Obama to become a dictator, and they could say, “you are no longer our president” and declare martial law (pronounced marshal law) in half the country, thereby, taking over half the country and having elections.

A similar thing could happen if Obama were to try to confiscate all the guns. Whatever happens, you can see how the seeds of the division is taking place now. The first thing Hitler did was nationalize the healthcare system. He gradually increased the power of the federal government over the states until he had full control. Obama is also increasing the power of the federal government, and has written many executive orders, bypassing the congress, thereby, he is already acting like a dictator.

Dimitru Duduman predicted that America will have a civil war, and that Russia and China (and no doubt the 10-nation revived Islamic empire (beast) also) will take advantage of the situation and nuke America, and then invade us. But we know the nuking will not take place until the end of the tribulation, in the Wrath of God after the Rapture, because Babylon the Great is not burned with fire until the end, as described in Revelation 18.

And my book also PROVES there will never be a world government ruled by a dictator. The beast is said to “make war” twice in Revelation 13. The beast will be a revived Islamic empire, which is even now trying to rise out of the Abyss with the war in Syria. Revelation 9 says that four angels bound at the Euphrates River will be released to kill 1/3rd of mankind. The Euphrates River begins in Turkey, flows through Syria, and then through Iraq. This means that WW3 will begin in that region or at least be caused by the people living in that region. This is discussed in detail in my book.

Get ready people, stock up on food, by a generator to power your home; it is going to be a bumpy ride. AND DON’T EXPECT THE RAPTURE. I prove many times over in my book, that the Rapture is prewrath, NOT pretrib.

(I had a typo on this page ever since it was first published, I forgot to include the word “NOT” in the above sentence. Mistakes happen.)(source)

Can This Be How America Will Be Judged and Split in Half?

RELATED : The New Madrid Earthquake That Will Divide The United States In Half

Here is a  another video of another prophecy and map:

A vision that I had of the New Madrid Divide. The Lord was impressing me that it was urgent to get this posted. I don’t know if that implies the timing or or just the need to post it. I don’t know if it is an earthquake. It possibly could be something else sets off the fault. I’m just relating what I saw.