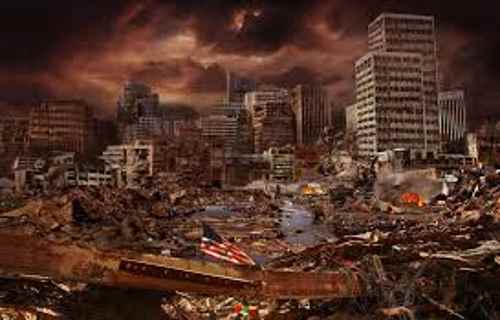 Risk of Nuclear War Higher Than Ever :As weapons of mass destruction proliferate to ever more nations, the nuclear equation becomes more complex and dangerous.

Martin E. Hellman  On the Probability of Nuclear War

Hiram Maxim, the inventor of the machine gun, declared, “Only a general who was a barbarian would send his men to certain death against the concentrated power of my new gun.” But send them they did. In World War One, the machine gun often mowed down tens of thousands of men in a single day.

Orville Wright saw a similar vision: “When my brother and I built and flew the first man-carrying flying machine, we thought we were introducing into the world an invention that would make further wars practically impossible.” Far from ending war, however, the airplane increased the ability to maim and kill. In firebombing raids on London, Hamburg and Tokyo the airplane wrought previously unimaginable levels of destruction. In a single night, March 9, 1945, 25 percent of Tokyo was destroyed, 80,000 people were killed, and over 1 million left homeless.

History shows the folly in hoping that each new, more destructive weapon will not be used. And yet we dare to hope that this time it will be different. We and the Soviets have amassed a combined arsenal of 50,000 nuclear weapons, equivalent in destructive force to some 6,000 World War II’s, capable of reaching their targets in a matter of minutes, and able to destroy every major city in the world. All in the belief that they will never be used.

RELATED : HOW TO MAKE YEAST FOR LONG-TERM STORAGE

But unless we make a radical shift in our thinking about war, this time will be no different. On our current path, nuclear war is inevitable.

The lower probability per year changes the time frame until we expect civilization to be destroyed, but it does not change the inevitability of the ruin. In either scenario, nuclear war is 100 percent certain to occur.

This pair of examples brings out a critically important point. Our only survival strategy is to continuously reduce the probability, driving it ever closer to zero. In contrast, our current policies are like repeatedly playing Russian roulette with more and more bullets in the chambers.

Click Here To See our Survival and Preparedness Solutions !

When it was merely moral and desirable, it might have been impossible to beat swords into plowshares. Today, it is necessary for survival.

Gen. Douglas MacArthur said in his 1961 address to the Philippines Congress: “You will say at once that, although the abolition of war has been the dream of man for centuries, every proposition to that end has been promptly discarded as impossible and fantastic. But that was before the science of the past decade made mass destruction a reality. The argument then was along spiritual and moral lines, and lost. But now the tremendous evolution of nuclear and other potentials of destruction has suddenly taken the problem away from its primary consideration as a moral and spiritual question and brought it abreast of scientific realism.”

There is potential for this to be the best of times or the end of time, depending on which direction we take at this critical juncture in human evolution. Technology has given a new, global meaning to the Biblical injunction: “I have set before you life and death, blessing and curse; therefore choose life, that you and your descendants may live.”

With the Nuclear Security Summit going on in Washington, DC, the question begs to be asked: What are the actual risks of atomic war? To help answer that question, RT America’s Anya Parampil speaks with Michel Chossudovsky.

RELATED : If This Ever Happens You Know You’re Days Away From Nuclear War

Imagine how you’d react if thousands of nuclear power plants were built surrounding your home. This video explains why you should react the same way to our depending on nuclear weapons for security.

As long as nuclear nations fear conventional war, they will never eliminate their nuclear arsenals. During the Cold War, the US was unwilling to agree to a “no first use” policy when faced with what appeared to be an overwhelming Soviet advantage in conventional weaponry and manpower. Today, the tables are reversed, and the Russians have retracted their support for such a policy.

As weapons of mass destruction proliferate to ever more nations, the nuclear equation becomes more complex and dangerous. Non-nuclear nations that fear confrontation with stronger powers will be strongly motivated to develop nuclear arsenals.

The most likely trigger for a nuclear war is a small war or confrontation that spirals out of control, with the 1962 Cuban Missile Crisis being a prime example. Just as World War I was sparked by a terrorist act in a third world hot spot, big wars often start from small acts of violence. Every small war is therefore like pulling the trigger in a global version of Russian roulette. Playing this game once is dangerous, but engaging in it continually leads to certain death.

During the process of change, we must simultaneously hold to the long range vision while dealing with the realities of a very dangerous world. Unilateral disarmament is not the answer, but unilateral initiative is essential.

Scott Pelley investigates the boldest assault ever on a facility containing weapons-grade uranium, a still-unsolved crime that could have had calamitous consequences.

2 thoughts on “Risk of Nuclear War Higher Than Ever :As weapons of mass destruction proliferate to ever more nations, the nuclear equation becomes more complex and dangerous.”