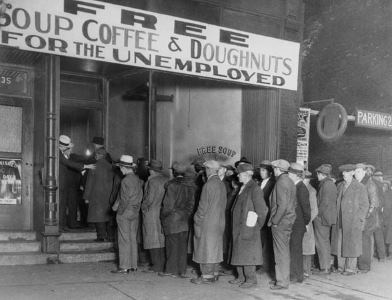 16 Nov 1930, Chicago, Illinois, USA — Notorious gangster Al Capone attempts to help unemployed men with his soup kitchen “Big Al’s Kitchen for the Needy.” The kitchen provides three meals a day consisting of soup with meat, bread, coffee, and doughnuts, feeding about 3500 people daily at a cost of $300 per day. — Image by © Bettmann/CORBIS

The probability of a major dollar crisis is very high. Things are mirroring the conditions that existed in 2008 except much worse. Russia and China have stopped buying treasuries and are now bypassing the Petrodollar and buying oil directly from the Middle East. China has started their own International Bank to compete with the IMF and World Bank. So far they have signed on 150 + countries as founding members of this new Bank. They plan on backing their currency with gold.

They have even convinced most of the US allies to join this new bank, including UK, Germany, France, and many others. The dollar is losing its status as the Worlds reserve currency which is a death blow. Many of the top financial people in the US that predicted the 2008 crisis are getting their money out of the dollar and recommending that others do the same. Even Jamie Diamond the head of JPMorgan Chase (the largest bank in the US) has said he expects a major event to take place with the dollar very soon. Look at this article on JPMorgan:

The dollar is not immune from the laws of economics that have existed throughout history. All fiat currencies eventually fail and the sign of the end is when the central bank (the Fed) of the country starts printing so much money that the debt becomes unsustainable. Even the US Treasury just came out with a report that said the US debt is unsustainable and will cause the dollar to crash unless congress balances the budget immediately. Congress is not capable of fixing this problem. Ron Paul tried for years. Below is a video that Ron Paul just released. It is a little scary, but I don’t think he is a fear monger. He has a lot of credibility and really believes this is a likely senerio and he is just one of many that are saying this. This is not a conspiracy theory. Its his opinion based on years of experience.

Ron Paul: Collapse Will Be The Worst In Modern History!