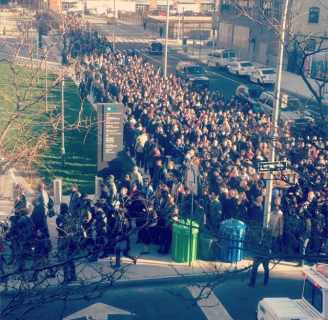 A recent study noted that the majority of people have enough food in their pantries to feed their household for about three days and that seemingly stable societies are really just nine meals from anarchy. With most of us dependent on just-in-time transportation systems to always be available, few ever consider the worst case scenario.

For tens of thousands of east coast residents that worst case scenario is now playing out in real-time. No longer are images of starving people waiting for government handouts restricted to just the third-world.

In the midst of crisis, once civilized societies will very rapidly descend into chaos when essential infrastructure systems collapse.

Though the National Guard was deployed before the storm even hit, there is simply no way for the government to coordinate a response requiring millions of servings of food, water and medical supplies

Many east coast residents who failed to evacuate or prepare reserve supplies ahead of the storm are being forced to fend for themselves.

Frustration and anger have taken hold, as residents have no means of acquiring food or gas and thousands of trucks across the region remain stuck in limbo.

Limited electricity has made it possible for some to share their experiences:
I was in chaos tonite tryin to get groceries…lines for shuttle buses, only to get to the no food left & closing early
I’m not sure what has shocked me more, all the communities around me destroyed, or the 5 hour lines for gas and food.

RELATED : When Will The Economy Collapse-Americans Are Feeling As More People Turn To Food Banks

RELATED : GERALD CELENTE – How To Survive The Coming Apocalypse. Guns, Gold, Cash, Food & Getaway Plan
Haven’t slept or ate well in a few days. Hope things start getting better around here soon
These days a lot of people are impatient because they’re used to fast things. Fast food, fast internet, fast lines and fast shipping etc.
Glad Obama is off to Vegas after his 90 minute visit. Gas lines are miles long.. Running out of food and water. Great Job
Went to the Grocery store and lines were crazy but nail salon was empty so I’ve got a new gel manicure and some Korean junk food
So f*cking devastated right now. Smell burning houses. People fighting for food. Pitch darkness. I may spend the night in rockaway to help

RELATED : Act Now to Ensure You Have Food Security for your Family

RELATED : A Guide to Looting When the SHTF (And Your Counter-Strategies)
Things are starting to become horrific for the unprepared, as food lines stretch for miles and Meals-Ready-To-Eat are in short supply: 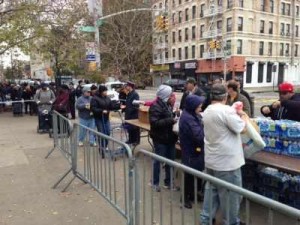 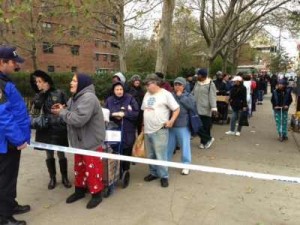 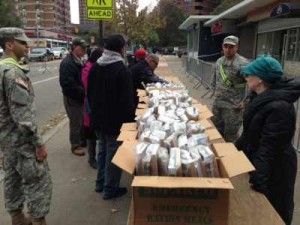 With mass transit out of service and no gas, residents have no choice but to commute by foot. Survival Blog founder James Rawles has referred to the masses of starving people who will roam the streets in a post-collapse world as the Golden Horde – here’s a small taste of what that will look like:

A simple 72 hour survival kit and some basic hurricane preparedness would have prevented days of heartache for residents of stricken areas.

RELATED : 75 BUG OUT BAG LIST ESSENTIALS FOR SURVIVAL AND PREPAREDNESS

The vast majority of those waiting in mile-long long food lines, rummaging through the trash, and criticizing their government officials for a slow and insufficient response have no one to blame but themselves.

This may be harsh – but it’s true.

We wish all those having a difficult time dealing with the aftermath of Hurricane Sandy the best going forward. Perhaps it will be a wake-up call for the rest of the nation.

Hurricane Sandy, while disastrous, is not nearly as bad as it could have been.

It has happened before. It will happen again. Prepare or suffer the consequences.

Contributed by Mac Slavo of The Daily Sheeple.

Mac Slavo is co-creator of The Daily Sheeple, an alternative media venue for breaking news, opinion, commentary and information. Mac is also the founder of the popular SHTFplan.com community oriented website which aims to help individuals understand and prepare for troubling times. Wake the Flock Up!