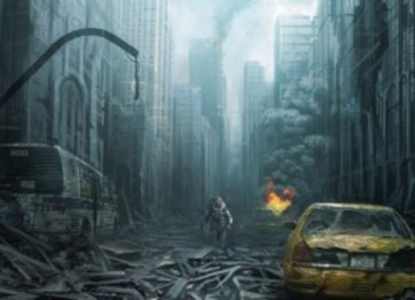 It is always a good idea to prepare for reasonably common events such as natural disasters, large climate events like drought, and generally to be as self-sufficient as possible. The natural world, coupled with the insanity of global banksters, should get us all prepping in a hurry.

Doomsday is another matter entirely. As 2015 approaches, we have doomsday coming in every stripe: World War III, religious rapture, Mayan prophecies, Nibiru, alien intervention, and even a zombie apocalypse: you name it. People are prepping like never before and even building their doomsday bunkers to ride it out. And all the while Hollywood is right there either to be a reflection of our concerns that can be capitalized upon, or to give a lending hand to global management who would like us to behave a certain way when the inevitable doomsday does arrive — it’s a technique known as predictive programming.

No matter your view, the flurry of apocalyptic television programming and major motion pictures should get our attention, as we are being shown how “entertaining” the end of the world can be.

It is apparent from the trailer that the power grid has failed (and is perhaps an inside job) and that the real power is what survivors are struggling for. Revolution takes place 15 years after the apocalyptic event and we are shown a bleak landscape which appears to be like Road Warriormeets the Hunger Games.

Interesting to note that local groups are called “militias” and are headed by warlords. The word militia has, of course, become the catch-phrase used in the MIAC document of 2009 to include such villains as Ron Paul supporters, constitutionalists and returning veterans. But here is the official summary from NBC Publicity:

Our entire way of life depends on electricity. So what would happen if it just stopped working? Well, one day, like a switch turned off, the world is suddenly thrust back into the dark ages. Planes fall from the sky, hospitals shut down, and communication is impossible. And without any modern technology, who can tell us why? Now, 15 years later, life is back to what it once was long before the industrial revolution: families living in quiet cul-de-sacs, and when the sun goes down lanterns and candles are lit. Life is slower and sweeter. Or is it? On the fringes of small farming communities, danger lurks. And a young woman’s life is dramatically changed when a local militia arrives and kills her father, who mysteriously – and unbeknownst to her – had something to do with the blackout. This brutal encounter sets her and two unlikely companions off on a daring coming-of-age journey to find answers about the past in the hopes of reclaiming the future.

Holly Deyo, author of Dare to Prepare! has issued a scathing critique of this popular programming, and how it distorts what might otherwise be a worthwhile attempt to bring prepping to the mainstream. Instead…

It was a near-given that this program would paint preppers as wackadoodles and in this regard, it doesn’t disappoint. To be fair, some creative and unique ideas are demonstrated, but then they gum up the works with the ridiculous…

Most astonishing in one episode the analysts negate the chances of an EMP-induced power grid failure, when NOAA, a notoriously conservative venue, says this is a near certainty. Mainstream has reported on this potentially catastrophic problem for the past 2 or 3 years. Writers of Doomsday Preppers should have done their homework to avoid looking so ignorant.

A lot of people think of ‘preppers’ and they think of the TV show Doomsday Preppersand other media reports which portray extreme examples . . .We wanted to make it clear that prepping is not an extremist or anti-establishment decision. Most of it is just good common sense.

According to the trailer, Take Shelter is the winner of two awards at the prestigious Cannes Film Festival, and an official selection at The Sundance Film Festival. This normally means that there is at least something deeper to say beyond the normal mainstream, big budget film.

One interesting element that is introduced is the focus on a central character who has a premonition of a catastrophic event. He takes action and begins to make preparations for the event in the face of intense criticism from friends and family who think he might be losing his mind and wasting money building a storm shelter lined with storable goods. As his preparations intensify, it is clear that one is left to wonder if this is prophecy, schizophrenia, or something else.

Take Shelter could be a critique of how the general public views anyone with “End Times” beliefs or the desire to prepare for any type of cataclysm or societal collapse. Or, it could be a cautionary tale to that very same ignorance-is-bliss public to listen a little better to those who are taking steps to protect them from the fallout.

The End of The World is a horror comedy in development with Seth Rogen and Sony Pictures based on his short film Jay and Seth vs. The Apocalypse. The film is also inspired by an eerie conversation Rogen had with Hollywood insiders George Lucas and Steven Spielberg who revealed to Rogen that they were personally preparing for a doomsday event in 2012. Is this movie a bit of necessary comic relief, or does it serve to acclimatize us that the end of the world could be cool, fun … and even funny?

These new programs follow in the footsteps of other series such as The Colony, and movies likeContagion. For an interesting database of apocalyptic films, visit ApocalypticMovies.com to trace them from the 1950s on — have they helped prepare (program) us for what we have already seen come to pass? How have they changed over the decades?

The U.S. government certainly seems to be gearing up for something big with its massive purchase of ammunition – perhaps civil unrest from a collapsing economy? Despite preparations made by governments and elites, there has been a move to paint preppers as crazy and even threatening.

U.S. officials themselves have prepared for the very same cataclysmic scenarios through their Continuity of Government agenda and they hold the ultimate bunker in Cheyenne Mountain.

However, the public is increasing its preparedness as well, since the alarm bells are sounding louder than ever before. Survival purchases are skyrocketing, and guns are being bought in record numbers.

30% believe in  end-of-the world scenarios
50-55% are concerned about economic collapse and political unrest
20% wish to protect against military, data storage and EMP threats
Perhaps Apocalyptic TV has always been with us in one way or another and has remained popular, because most people believe that the end of the world is always looming just over the horizon.

Since this month is National Preparedness Month – if we continue to be so intrigued by the myriad cinematic ways our society can meet its untimely end, we might as well prepare for the reality just in case one of these scenarios jumps off the screen.