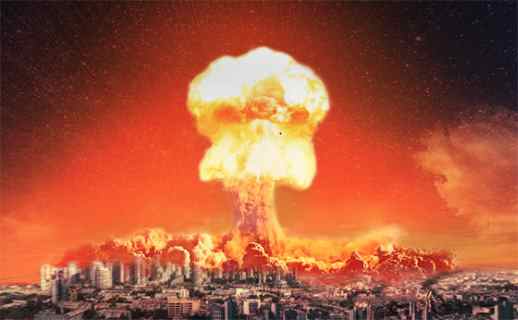 Whether you think you’re prepared or not, if it hit the fan – right now – what would you do?

I’m mostly curious to hear what you have to say, but here are a few of my thoughts —
If ‘it’ happened right at this moment, the things that I would do next are relative to where I am at the moment, coupled with whatever ‘it’ is.

For this hypothetical question, lets just presume that ‘it’ is pretty bad, and will probably be long lasting while the effects will be variable – some regions worse than others – but much worse in the cities and MSA’s (Metropolitan Statistical Areas).
Even for those who have diligently prepared for disaster, sometimes there is a feeling that there just isn’t enough in one’s food and supply inventory yet… There also may be the feeling that there is still a lack of adequate self-sufficiency / self-reliance skills to assist in the endeavor to ‘stay alive’ long term without the systemic infrastructure which brings us our modern life-sustaining food and supplies.

That said, if the SHTF right now, it will probably mostly be too late to accomplish fulfilling much of any deficit.

I ask you to seriously contemplate this question (of what would you do ‘right now’) because the answers to that question (and there will be many) will probably identify some areas where you are still lacking.

These are the things that you should take care of today, so that ‘if’ the SHTF for real, you won’t be too late.

If All Hell Breaks Loose

If ‘all hell breaks loose’, there are two basic categories to consider.

The category of existing tangible assets could be (will be) quite large. Not only will it include the abundance of basic necessities such as food, water, shelter, and protection, but it will also include all of the tools and supplies to compliment category #2 (your skills).

If while contemplating ‘what would you do’ and if some of the answers identify areas where you are lacking in certain tangible supplies which you believe will be important (or even life-sustaining) while surviving a long-term SHTF, then that’s good – you’ve identified something – now go out and get it.

Acquiring the tangible assets to get you through a period of time on your own – is easy if you have the money to do it. The problem lies more with ‘your skills’ which will be necessary to continue your self-sufficiency beyond that of your immediate supply storage. Fortunately, we’ve not had to rely much on this in modern times since most ‘typical’ disastrous circumstances are brought under control within a relatively short period of time. But this might not always be the case…

We live in a very dangerous world (although most sheeple don’t realize it). There are quite a number of things which could vault us into utter collapse – beyond which an ordinary supply of storage will help. Those of us who see it – need to take responsibility and prepare for it. If it never happens, you will still be better for it. Responsible, strong, self-reliant men and women.

If the SHTF in a big way, most of those living in suburbia will probably have a number of days before security concerns come into play. The security problem will become a big one when the public at large realizes that this particular SHTF is going to be real bad, and there’s little hope that dot-gov will save them this time. Once that threshold is crossed (realization) then panic will set in for many. Things become dangerous. Obviously the cities and densely populated MSA’s will be at greatest risk.

So, back to the question – What would you do if the SHTF right now?

For me, as I type this, my immediate reaction and concern would be the security of myself and Mrs.J. Even though danger would not have set in yet (and hopefully not for awhile given my rural location and self-reliant community), my first ‘action item’ would be to go to ‘condition orange’ (even though there is no specific threat at the moment).

Once that is in order (security), I would proceed to ‘hunker down’ mode. I would fairly quickly ascertain the need to top off any supplies while most sheeple are still ‘in the dark’ and then proceed to acquire them locally with cash from the safe. At this moment I am well supplied though – but it never hurts to top off one’s gas tank (if there’s still electricity for the pumps) and top off other consumables if it is safe to do so.

Next, I would fire up my portable radios. Even without electricity I am still able to receive information by way of my battery operated radios (with solar recharging capabilities) and Ham radios. Information is crucial to making better decisions!

Following that, for me, given that I cannot see any other house from where I live and no-one will ever see mine without driving 1/3 mile down a dirt road, I would still establish communications with my closest neighbors whom I know and trust — and then it becomes a matter of getting into a routine of heightened security, conservation of existing food and supplies, and implementing a security and survival plan which will hopefully be self-sustaining as time proceeds.

For the prepared who live in neighborhoods with lots of other people, I believe that stealth and security will be a major issue (assuming you already have adequate supplies). If I lived there, one plan would be to lay low, to ‘fit in’ with those who have nothing (have run out of supplies) while also being on high alert for anyone who may challenge that. There is lots to consider in this situation…

If neighborhoods or parts of neighborhoods banded together, there would be much more hope for long-term survival – so long as there is a will and skills to do so. Having said that, I’m not so sure how successful this would be given today’s lack of individual self-reliance attributes. Instead we are largely a society of dependence, and there is a great lack of knowledge and skills that our grand parents and great grand parents had ‘back in the day’ which enabled them to survive and thrive on their own – with little or no help from dot-gov.

1 thought on “If The SHTF, RIGHT NOW, What Would You Do?”