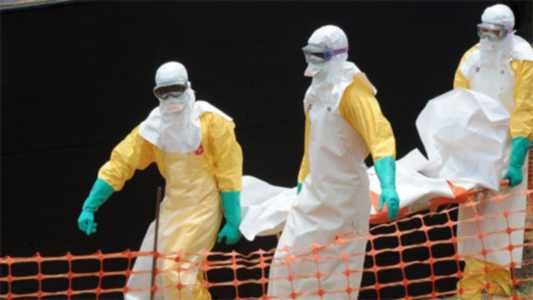 (Image Credit: SEYLLOU/AFP. Workers with Doctors Without Borders carry the body of a victim of Ebola in Guekedou, Guinea)

Earlier this year it was reported that the deadly Ebola virus had broken through all containment barriers making its way to seven west African countries. In an effort to stop widespread panic gripping the affected nations government officials told theReuters news service that they would no longer release infection rates and death tolls to the public. In recent months, with no updates being provided to the public, many outside of Africa assumed that the virus spread had subsided.

But according to the latest figures the Ebola contagion is now deadlier than ever. A senior official with the organization Doctors Without Borders spoke with theAssociated Press this week and warned that a second wave of the epidemic has taken hold, thus far claiming the lives of over 300 people with the infection confirmed in at least 550 people.

The Ebola outbreak ravaging West Africa is “totally out of control,” according to a senior official for Doctors Without Borders, who says the medical group is stretched to the limit in its capacity to respond.

“The reality is clear that the epidemic is now in a second wave,” Janssens said. “And, for me, it is totally out of control.”

The outbreak, which began in Guinea either late last year or early this year, had appeared to slow before picking up pace again in recent weeks, including spreading to the Liberian capital for the first time.

“This is the highest outbreak on record and has the highest number of deaths, so this is unprecedented so far,” said Armand Sprecher, a public health specialist with Doctors Without Borders.

The multiple locations of the current outbreak and its movement across borders make it one of the “most challenging Ebola outbreaks ever,” Fadela Chaib, a spokeswoman for the World Health Organization, said earlier in the week.

The outbreak shows no sign of abating and that governments and international organizations were “far from winning this battle,” Unni Krishnan, head of disaster preparedness and response for Plan International, said Friday.

Europe and the United States, while having issued warnings about the potential for Ebola to make its way out of Africa, have as of yet taken no immediate steps to contain the virus. Flights in and out of the region are still available and often pass right through major airport hubs like London.

The official fatality rate of those who contract the virus is over 50% and because containment efforts have failed to stop the spread at its source it is become increasingly likely that the virus could mutate as it touches a larger segment of the population. The virus is not airborne, so it is currently only passed via direct human-to-human contact. Researchers say that the possibility of the virus going airborne is small, but because of the rapid mutation capability of Ebola it remains a distinct possibility and the more exposure it has to humans the more advanced it can become.

There is no known cure for the virus, thus the only method of surviving such an outbreak unscathed is prevention through isolation, a strategy :

When an outbreak occurs, those living in cities, and those living in close proximity of others will be more at risk. Statistics from previous pandemics indicate that 30–60 percent of the population will contract an illness.

When the pandemic begins, many will remain in a state of denial about any approaching epidemics and not want to think of the long lasting repercussions of such a disaster. Being prepared before the mass come out of their daze will ensure that you are better prepared before the hoards run to the store to stock up.

Here are a few ideas to consider on how to better prepare for family for this type of emergency:

If Ebola were to mutate and expand further it could be a serious humanitarian crisis. As Tess notes, most people will remain in denial, assuming that government emergency responders will be able to get a handle on it.

But, as evidenced by the events in west Africa over the last six months, sometimes even the best laid plans are not enough. By the time most people realize that the situation is out of control it will already be too late.