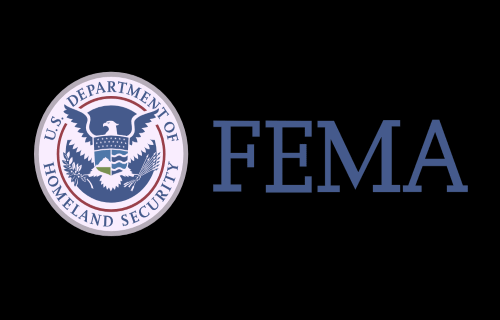 Warning: FEMA is Getting Ready to Mobilize “Civilian” Troops; Martial Law Soon? When The Elite Call Their Selected Agents Together, It’s Time To Pay Attention.

Just recently the preparedness agency of the United States government also known as FEMA activated their “civilian” corps. The only question is, for what?

FEMA, the agency called upon in any disaster both foreign and domestic is up to something, and it could potentially be a disastrous event that is on the horizon, or it could just be for training. Whether it be a conspiracy or fact, the agency is up to something. Always planning and always ready for the next disaster to strike. The company in question, FEMA, is not for the people but rather against them as proven time and time again throughout every catastrophe.

If FEMA truly was for the people, there should be no question about it; there should be no doubt that FEMA is there to help people, and not strip them of their rights, or lock them in cages. The most famous example of FEMAs abuse is when Katrina struck in 2005.

FEMA and authorities confiscated the rights of civilians during a crisis, instead of offering a helping hand they did nothing but treat the victims as though they are criminals which can firmly point to the conclusion that FEMA is an agency not for the people but rather against their rights.

Shortly after the fact, came the FEMA camps. FEMA camps were initially discovered years before Katrina but would not become widespread conspiracy until after Katrina. Detention camps do exist, and they are everywhere.

Moving on through many different crises and many different discoveries about the dirty agencies secrets, brings about the following and why it is rather startling to those who are aware of the tyrannical abuse FEMA causes to its victims in their time of need.

Recently a letter was discovered, and while it cannot be fully confirmed, it should be taken under extreme advisement. Within FEMA is a “hush hush” agency known as the Civilian Corps. A Civilian Corps is a group of individuals who are formerly military, medical, police, and so on; who get called upon in times of extreme crisis, and when law and order is no longer. Well, that FEMA civilian corps was just called to a meeting last week.

Below is the actual text of the letter. 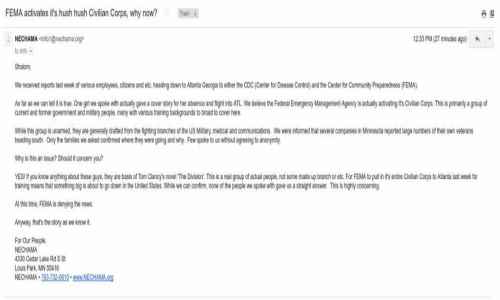 We received reports last week of various employees, citizens and etc. heading down to Atlanta Georgia to either the CDC (Center for Disease Control) and the Center for Community Preparedness (FEMA).

As far as we can tell it is true. One girl we spoke with actually gave a cover story for her absence and flight into ATL. We believe Federal Emergency Management Agency is actually activating its Civilian Corps. This is primarily a group of current and former government and military people, many with various training backgrounds to broad to cover here. [SIC]

While this group is unarmed, they are generally drafted from the fighting branches of the US Military, medical and communications. We were informed that several companies in Minnesota responded large numbers of their own veterans heading south. Only the families we asked confirmed where they were going and why. Few spoke to us without agreeing to anonymity.

Why is this an issue? Should it concern you?

YES! If you know anything about these guys, they are basis of Tom Clancy’s novel ‘The Division’. This is a real group of actual people, not some made up branch or etc. For FEMA to pull in it’s entire Civilian Corps to Atlanta last week for training means that something big is about to go down in the United States. While we can confirm, none of the people we spoke with gave us a straight answer. This is highly concerning. [emphasis added]

At this time, FEMA is denying the news.
Anyway, that’s the story as we know it.

To top it off, NACHMA, a Jewish non-profit preparedness organization, signed the letter.

Whether or not you are in agreement that FEMA is a tyrannical agency, you cannot deny the very fact that FEMA is preparing for something, and it is not a “typical” disaster. Whether or not this be just a “training” exercise, the reality is that down the line, something BIG is coming.

Finally, the actual authentication of this letter will remain unknown until disaster does or doesn’t strike. The only valid point mankind should grip is that if FEMA is gearing up, mankind should also.(source)

RELATED : PUTIN warns U.S. about the NEW WORLD ORDER 2016!! All need to see this!! Elites Plan to Crash World Economy