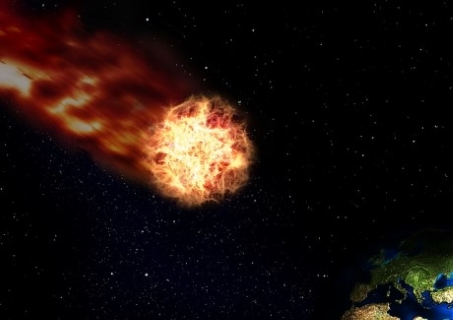 Why Is NASA Working On A Way To Destroy Asteroids Using Nuclear Weapons?

Yes, I know that headline sounds like it comes from the 1998 movie “Armageddon” starting Bruce Willis, but this is actually happening.  NASA and the National Nuclear Security Administration are teaming up to try to figure out a way to use nuclear weapons to either destroy threatening asteroids or to at least nudge them off course.  This seems very odd considering the fact that just a couple of weeks ago NASA publicly announced that it knew of “no asteroid or comet currently on a collision course with Earth” and that “no large object is likely to strike the Earth any time in the next several hundred years“.  If what NASA told us previously is true, than it would seem that it would be a tremendous waste of time, money and resources to work on a way to destroy asteroids using nuclear weapons.  Why is NASA suddenly so interested in the threat of large asteroids if one is not likely to hit us “any time in the next several hundred years”?  Could it be possible that they know something that they are not telling us?

When I first heard that NASA was teaming up with the National Nuclear Security Administration to figure out a way to use nuclear weapons against asteroids, I immediately had flashbacks to two of my favorite movies from the 1990s – Deep Impact and Armageddon.  But it disturbs me that our “best minds” haven’t come up with any better ideas since those films first came out.  The following is from a New York Times article about this new development…

The two agencies — NASA and the National Nuclear Security Administration — have long studied such threats on their own. They have surveyed the cosmic debris, designed rocket interceptors and run supercomputer simulations to see if a nuclear blast could nudge a large asteroid off course.

In interviews, federal officials and private experts said the new interagency agreement would deepen the levels of expert cooperation and governmental planning, ultimately increasing the chances of a successful deflection.

“It’s a big step forward,” said Kevin Greenaugh, a senior official at the nuclear security agency. “Whenever you have multiple agencies coming together for the common defense, that’s news.”

It sounds like such a perfectly “American” solution, doesn’t it?

What should we do if a big threat is coming our way?

But as MSN has pointed out, blowing up a gigantic mountain of rock hurtling toward us at ultra-high speed could create an even bigger problem…

Computer simulations suggest that we could successfully blow up a medium-sized space rock. However, the resulting rock fragments could potentially make the situation worse, depending on how far the asteroid is from Earth when it explodes. A better solution might be to use the bomb to deflect the asteroid instead of blowing it to smithereens.

Other (non-nuclear) proposals include gravity tractors, using sunlight to “boil off” parts of the Near Earth Object, and using lasers or high-speed spacecraft to nudge the object off of its collision course with Earth. However, a 2007 NASA studyindicated that nuclear solutions may be the best weapon we’ve got when it comes to fighting killer space rocks.

But this isn’t all that NASA has been up to.

Earlier this year, they conducted a “hypothetical asteroid impact scenario”.  The following is what the official NASA website has to say about that exercise…

At the 2015 IAA Planetary Defense Conference (PDC), to be held April 13 – 17, 2015 in Frascati, Italy, a hypothetical asteroid impact scenario will be presented and used as a basis for discussion. NOTE: Although this scenario is realistic in many ways, it is completely fictional and does NOT describe a real potential asteroid impact.

So why is NASA spending so much time and energy on something they say is probably not going to happen “any time in the next several hundred years”?

Of course the truth is that NASA is not being straight with us.  As the Daily Mail recently explained, there are approximately a million near-Earth objects that could potentially be a threat to our planet, and NASA only knows where a small percentage of them are…

Scientists believe there are around one million near-Earth asteroids that could pose a threat to our planet – but only a tiny fraction have so far been detected.

Dramatic proof that any of these can strike Earth came on 15 February last year, when an unknown object exploded high above Chelyabinsk, Russia, with 20 – 30 times the energy of the Hiroshima atomic bomb.

It is true that our ability to detect asteroids that can impact our planet has grown.  But it is still extremely limited.  Here is more from the Daily Mail…

But existing asteroid detection systems can only track one percent of the estimated objects that orbit the sun, according to asteroid mining firm Planetary Resources, who is partnering with Nasa on the project.

In a session at the SXSW conference in Texas last year, Nasa scientist Jason Kessler said: ‘The likelihood of something hitting us in the future is pretty guaranteed, although we’re not freaking out that there is an imminent threat.’

Yes, without a doubt the chance that a giant space rock will hit us at some point in the future is indeed “pretty guaranteed”.  We know that giant asteroids have hit our planet in the past, and there was a pretty significant “near miss” just a few months ago that NASA did not see coming in advance.  I wish that they would just be honest with us.  NASA cannot see all of the giant space rocks that could be a threat to us, and they definitely should be spending time, money and resources on this problem.

Someday if a giant asteroid were to hit us in just the right spot, like just off the east coast of the United States for example, the consequences would be absolutely catastrophic.  We could suddenly be faced with a tsunami hundreds of feet high racing toward our major coastal cities.

Most people assume that a major asteroid strike is not a threat because one has not happened during any of our lifetimes.  But NASA would not be going to all of this trouble if this was something that they were not concerned about.

In the end, what they are not telling us could turn out to be far more of a problem than most of us ever imagined.(source)