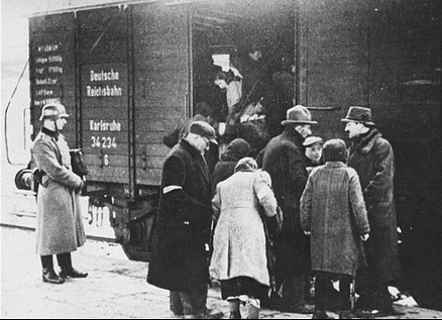 (Pictured: Krakow, Poland Circa 1941. German SS supervises Jews being loaded into cattle boxcars. Few fought back and chose instead to be taken to their doom.)

What Do You Prep For?

One of the more-interesting discussions I’ve had over the years on a fairly consistent basis deals with the premise of prepping — usually initiated by someone who’s talking about a bug-out location, firearms, (freeze-dried or home-grown) or (usually) all of the above.

RELATED : The Majority Of You Will Die In A Food Supply Collapse

Let’s dissect this a bit, because the word prepping or prepper describe a lot of different things — and frankly, the more I hear about some of them the more I nod in approval at some, while smirking at others.  I think it’s time we have this discussion, particularly given the rather-precarious nature of our global economy (driven almost-entirely by government attempts to protect certain powerful people and institutions.)

Underlying all of this is a problem that I and others have recognized for a long time: Humans do notoriously poorly at analyzing “tail risks” and acting appropriately in the face of them.  I’ll just put one example out there — the Jews during WWII.  Hitler’s soldiers frequently came into a town with a few dozen men armed with machine guns and rounded up thousands of people, marching them into waiting boxcars.

The decision point to either riot or get into the boxcar happened right then and there, and was irrevocable.

If you got into the boxcar, and essentially all of the folks in the town did, you were almost-certain to die.  Not instantly, but certainly.  Once you were in that boxcar there was nothing more to be done; you were going to be unloaded inside a fenced compound with crew-served weapons canvassing the perimeter, and were outright screwed.

The problem was that if you decided to riot singularly you were going to die with certainty.  But if the village rioted collectively, a hundred, two hundred or five hundred of you would die but the rest would not because you would have overrun the relatively small contingent of soldiers and, the first time they had to reload their hand-held weapons they were going to get sacked.

The mathematically correct decision is to bum rush the soldiers.  The reason is this: You had no downside in doing so, and while the potential for upside (living) wasn’t wonderful it beat the alternative.

So let’s look at a few scenarios that you can prep for, and then look at the potential range of outcomes and whether you’re likely to influence them with your actions.

But before we go into those scenarios I want to discuss something that’s even more-important: your personal sensitivity to specific disruptions.

Let’s take a few relatively extreme examples.  If you are on dialysis, for example, and the center and/or hospitals in the area where you are happen to be unable to provide that service you’re incapacitated within a few days and dead within a few more.  This is also true if you are insulin-dependent and lose either your insulin supply orrefrigeration.  Then there are those with even shorter time-lines — those dependent on oxygen supplementation to name just one example.

If you are in one of these categories then all the “ordinary” prepper thoughts are utterly worthless.  Some of these needs can be hedged against, but not all.  Medical technology dependency is one of the worst because there is really no hedge available to people of ordinary means that is effective.  As such if you, or someone you love, is in such a situation you need to give serious thought as to whether you can do something about that and, if you can, do it.  If you can’t, either due to bad luck or previous choices that you cannot reverse the effect of then in my opinion the rest of this discussion is not only pointless but you ought to expend your resources elsewhere and derive pleasure to the extent you’re able from the resource you would otherwise divert to such an attempt.  The one place you do want to spend resource preparing is on a reliable and executable plan to get the hell out of dodge at the first sign of trouble to somewhere that has the resources available for you to continue onward.  Figure that transportation requirement out, make damn sure it is always available, have three destinations with all reachable within no more than one half of the amount of time you have until you’re seriously impaired and maintain that as your primary — if not only — “preparedness” strategy.  This will cover local and (minor) regional problems; for anything more-severe, which I’ll get into in a later article, you must accept that there’s nothing productive you can do to alter the outcome.

Second, but not far down the list, is those of you who are allegedly preppers and have significant but able to be mitigated physical or emotional issues.  Deal with them now, and first, before worrying about the rest.  These sorts of issues take months — and sometimes years — to handle.  The most-important assets you have in any bad situation are your mind and bodily stamina.  If you are mentally unstable in any material way or physically challenged in a way you can address (e.g. you’re fat and thus unable to undertake a hike of 10 or 20 miles with a heavy pack — or run a few miles — should the need arise) then fix that right now.  Again, all the prepping in the world is immaterial if you don’t survive long enough for your supplies and planning to matter.

Next up will be common scenarios……. stay tuned!

Karl Denninger is the author of Leverage: How Cheap Money Will Destroy the World in which he discusses the ill-use of leverage and how it is destroying the global economy, as well as where all of this will lead. The result is ugly: the value of everything—including gold—falls, and even personal safety is at risk in a world where there is limited money even for essentials like food and fuel.