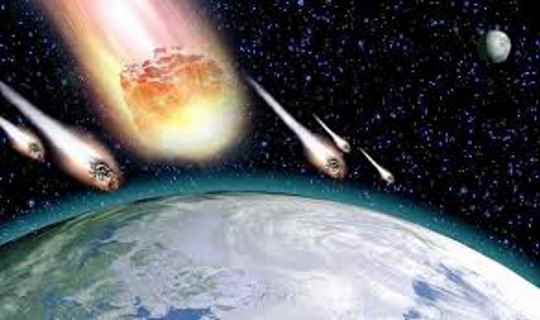 UNKNOWN OBJECT TO HIT EARTH ON FRIDAY THE 13TH

A mysterious object from space will enter Earth’s atmosphere in November — on Friday the 13th, no less. Researchers are saying there’s no need to panic, but who really knows what might happen…

A chunk of space debris — more specifically, ‘a suspected rocket body’, as the European Space Agency (ESA) suggested — named WT1190F, or WTF, is set to enter the Earth’s atmosphere over Sri Lanka at06:19 GMT on November 13. Most likely, what’s not burnt up after friction with the planetary atmosphere will splash down somewhere in the Indian Ocean.

RELATED : Coming chaos or mere coincidence: Could these be signs of an approaching Planet X?

“Since it formed over 4.5 billion years ago, Earth has been hit many times by asteroids and comets whose orbits bring them into the inner solar system. These objects, collectively known as Near Earth Objects or NEOs, still pose a danger to Earth today. Depending on the size of the impacting object, such a collision can cause massive damage on local to global scales. There is no doubt that sometime in the future Earth wil suffer another cosmic impact; the only question is “when?”. There is strong scientific evidence that cosmic collisions have played a major role in the mass extinctions documented in Earth’s fossil record. That such cosmic collisions can still occur today was demonstrated graphically in 1994 when Comet Shoemaker-Levy 9 broke apart and 21 fragments, some as large as 2 km in diameter, crashed into the atmosphere of Jupiter. If these fragments had hit Earth instead, we would have suffered global catastrophes of the kind that inspire science“

RELATED : EXCLUSIVE: ‘Mountain-sized asteroid’ that could wipe out Earth heading OUR way

Is a Comet or Asteroid on a collision course with earth? Recent Information suggest a comet is expected to hit the earth between September 2015 to 2016. This information was leaked by a NASA insider. Foreign minister of France three times publicly announced at a White House press conference a 500-day countdown to “climate chaos”.

Prophet Efrain Rodríguez claims the end is near. Many believe he is referring to a large comet or asteroid hitting the earth. Could he be correct? Did the Lord come and give Efrain a message for the people? Will this event usher in the end times?

RELATED : Planet X Nibiru the End Times Event is Near 2015

Here are his words.

“May The Lord bless all of you. We all work as Watchmen to share this word from God given to this prophet and servant of The Lord, to win souls and save lives, not only in Puerto Rico and the Caribbean area, but all over the world. As stated, this event will affect every corner of the Earth, directly or indirectly. You are now all part of this End Time Army to reach souls for The Lord. Time is short. Preparations are being made all over the world for this event. When will it happen? Only The Lord knows. He only revealed to Efrain that time of impact would be around 2am and that it would happen at His chosen time after the death of Evangelist Yiye Avila. But the more time He gives us means the more we can do to spread this message.”