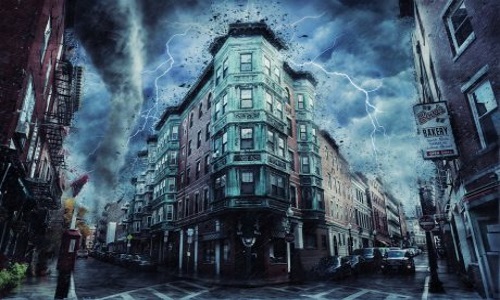 Two major hurricanes, unprecedented earthquake swarms and wildfires roaring out of control all over the northwest United States – what else will go wrong next?  When I originally pointed to the month of September as a critical time, I had no idea that we would see so many catastrophic natural disasters during this time frame as well.  Hurricane Harvey just broke the all-time record for rainfall in the continental United States, Hurricane Irma is so immensely powerful that it has been called “a lawnmower from the sky”, vast stretches of our country out west are literally being consumed by fire, and the magnitude-8.2 earthquake that just hit Mexico was completely unexpected.  As I have stated so many times before, our planet is becoming increasingly unstable, but most people simply do not understand what is happening.

My good friend Zach Drew is getting married next month, and I would encourage everyone to go wish him well on Facebook.  On Friday, he posted the best summary of the major disasters that we have been experiencing so far this month that I have seen anywhere…

California is on fire.

Oregon is on fire.

Washington is on fire.

British Columbia is on fire.

Alberta is on fire

Montana is on fire.

Nova Scotia is on fire.

Greece is on fire.

Brazil is on fire.

Portugal is on fire.

Algeria is on fire.

Tunisia is on fire.

Greenland is on fire.

The Sakha Republic of Russia is on fire.

Siberia is on fire.

Texas is under water

Sierra Leone and Niger experience massive floods, mudslides, and deaths in the thousands.

Southern California continues to swelter under triple digit heat that shows no sign of letting up.

In usually chilly August, the city of San Francisco shatters all-time record at 106 degrees, while it reaches 115 degrees south of the city. Northern California continues to bake in the triple digits.

Hurricanes Harvey, Irma (biggest ever recorded), Jose and Katia are barreling around the Atlantic with 8 more potentials forming

And last but not least an X10 C.M.E solar flare two nights ago. The highest recorded solar flare ever!

For much more from Zach, you can follow his work regularly at TruNews.com.

Some are describing what is happening to us as a “perfect storm”, and they are wondering if even more major disasters are coming in the very near future.

Let us hope not, because there is a tremendous amount of concern that we may not be able to pay for the disasters that have happened already.  The following comes from Politico…

Harvey and Irma could be a breaking point. At $556 billion, the Houston metropolitan area’s economy is bigger than Sweden’s. New Jersey could easily fit inside the region’s sprawling footprint, where Harvey dumped 34 trillion gallons of water, as much as the three costliest floods in Texas history combined. The Harvey response alone eventually could double the $136 billion in government aid spent after Hurricane Katrina flooded New Orleans.

And as of Friday, an estimated $1.73 trillion worth of real estate was in the path of Irma’s hurricane-force winds, according to the University of Wisconsin’s Cooperative Institute for Meteorological Satellite Studies.

We won’t know the true extent of the damage that has been caused down in Florida for many days, but we do know that much of the state is already without power…

More than 3.3 million homes and businesses and counting have lost power in Florida as Hurricane Irma moves up the peninsula. The widespread outages stretch from the Florida Keys all the way into central Florida. Florida Power & Light, the state’s largest electric utility, said there were nearly 1 million customers without power in Miami-Dade County alone. The power outages are expected to increase as the storm edges further north. There are roughly 7 million residential customers in the state.

In the end, the federal government will likely step in and spend a lot of money that it does not have to rebuild and restore the communities that Hurricane Harvey and Hurricane Irma have destroyed.

At some point all of this debt will simply become completely unsustainable.

Of course the major disasters will just inevitably keep on coming.  As Politico has pointed out, major natural disasters seem to just keep on getting bigger, and they seem to be hitting us more frequently than in the past…

The disasters are arriving with greater frequency. Counting Harvey, the U.S. this year has experienced 10 weather-related events each costing $1 billion or more. The country averaged fewer than six big-dollar storms, flood, fires and freezes a year between 1980 and 2016, according to the National Oceanic and Atmospheric Administration. Between 2012 and 2016, however, weather catastrophes occurred almost twice as often.

I know that I have been writing about these hurricanes a lot in recent weeks, and I promise to get back to focusing on the economy in the days to come.

But it is absolutely imperative that we all begin to understand that something has fundamentally changed.  Our world has become much less stable, and “apocalyptic events” are starting to hit us one after another.

READ MORE : Say Goodbye to the 50 States, Get Ready for FEMA Regions For the North American Union

So will things start to calm down in the months ahead?  Please feel free to tell us what you think by posting a comment below…

Michael Snyder is a Republican candidate for Congress in Idaho’s First Congressional District, and you can learn how you can get involved in the campaign on his official website. His new book entitled “Living A Life That Really Matters” is available in paperback and for the Kindle on Amazon.com.