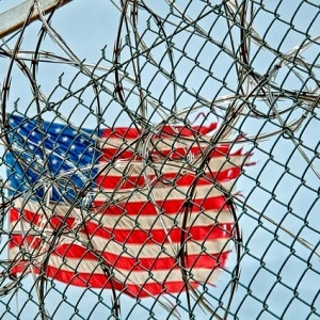 Have you noticed that we are starting to be bombarded with images of troops in the streets?  Have you noticed that the term “martial law” is coming up a lot in movies, news broadcasts and even in television commercials?  In recent years, it seems like the solution to almost every major crisis involves bringing in troops.  In fact, it has already gotten to the point where when something really bad happens a lot of Americans immediately cry out for troops to be brought in.  And we are seeing the same patterns over and over again.  Just remember what happened in Ferguson – protesters were whipped up to a frenzy, when the riots began the police were ordered to stand down and not intervene, and finally National Guard troops were brought in as the “solution” to a crisis that had escalated wildly out of control.  This is the exact same pattern that we are witnessing in Baltimore, and as you will see below, National Guard troops all over the nation have been training for this exact type of scenario.  A couple of decades ago, many Americans would have regarded the notion of “martial law in America” as absolutely unthinkable, but these days the threat of civil unrest is causing an increasing number of Americans to embrace the idea of troops patrolling our city streets.

The anger toward the police that we see in the city of Baltimore is very real, but there also seem to be a lot of signs that the events of the past several days have been orchestrated and manipulated.   This is something that I covered in my previous article entitled “12 Unanswered Questions About The Baltimore Riots That They Don’t Want Us To Ask“.  But what we have found out since then is that high school kids appear to have been “herded” by the police into the Mondawmin neighborhood in Baltimore when school was let out on Monday…

When school let out that afternoon, police were in the area equipped with full riot gear. According to eyewitnesses in the Mondawmin neighborhood, the police were stopping bussesand forcing riders, including many students who were trying to get home, to disembark. Cops shut down the local subway stop. They also blockaded roads near the Mondawmin Mall and Frederick Douglass High School, which is across the street from the mall, and essentially corralled young people in the area. That is, they did not allow the after-school crowd to disperse.

Even though most of the kids did not seem to have any interest in participating in the much-hyped “purge”, it looks like authorities were determined to get their “purge” one way or another.  The following was posted to Facebook by a Baltimore teacher named Meghann Harris…

Police were forcing busses to stop and unload all their passengers. Then, [Frederick Douglass High School] students, in huge herds, were trying to leave on various busses but couldn’t catch any because they were all shut down. No kids were yet around except about 20, who looked like they were waiting for police to do something. The cops, on the other hand, were in full riot gear, marching toward any small social clique of students…It looked as if there were hundreds of cops.

A teacher at Douglass High School, who asked not to be identified, tells a similar story: “When school was winding down, many students were leaving early with their parents or of their own accord.” Those who didn’t depart early, she says, were stranded. Many of the students still at school at that point, she notes, wanted to get out of the area and avoid any Purge-like violence. Some were requesting rides home from teachers. But by now, it was difficult to leave the neighborhood. “I rode with another teacher home,” this teacher recalls, “and we had to route our travelaround the police in riot gear blocking the road…The majority of my students thought what was going to happen was stupid or were frightened at the idea. Very few seemed to want to participate in ‘the purge.’“

This paints a very different picture than we are getting from the media.

But once the violence and rioting did start, the police were nowhere to be found.  In fact, it is being reported that the mayor of Baltimore actually ordered the police to “stand down” and allow the chaos to spiral out of control…

Baltimore Mayor Stephanie Rawlings-Blake ordered the police to stand down as riots and looting broke out across they city, a new report claims.

According to a senior law enforcement source, the embattled mayor effectively told her officers to do nothing as the city began to burn – raising questions as to whether the rioting could have been stopped.

Finally, after several hours of madness, the order was given and the National Guard was brought in to quell the rioting.

Many of the Guardsmen are trained for a situation just like the one in Maryland.

It’s called “civil unrest training,” and it was recently completed in Tennessee with a local police department.

Troops have also trained in Maryland and Colorado.

“It really helped put it into perspective the person we are going to be up against – the rioter, the unruly person,” said one National Guard official.

The training includes gas mask training and practice with shields and batons.

There are so many instances in which “training” seems to eerily correspond with actual events.  That is one of the reasons why so many people are concerned about Jade Helm and all of the other very elaborate military exercises that are being held around the country in 2015.  In fact, there has been so much concern about Jade Helm that the governor of Texas has ordered the Texas Guard to monitor Jade Helm…

Gov. Greg Abbott ordered the Texas Guard to monitor federal military exercises in Texas after some citizens have lit up the Internet saying the maneuvers are actually the prelude to martial law.

The operation causing rampant suspicions is a new kind of exercise involving elite teams such as the SEALs and Green Berets from four military branches training over several states from July 15 to Sept. 15

Called Jade Helm 15, the exercise is one of the largest training operations done by the military in response to what it calls the evolving nature of warfare. About 1,200 special operations personnel will be involved and move covertly among the public. They will use military equipment to travel between seven Southwestern states from Texas to California.

The following is a map from Jade Helm materials, and it designates Utah and Texas as “hostile territory”.  Yes, I know that this is supposed to be an “exercise”, but even so this is highly inappropriate to say the least… 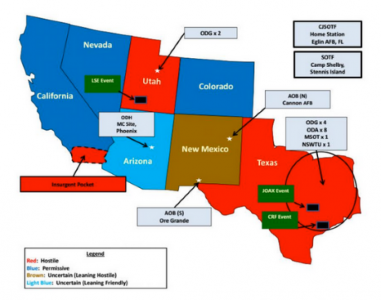 Lastly, I want to share with you an AARP commercial that appears to have a subliminal message in the background about martial law.

Why in the world would a television commercial aimed at senior citizens talk about martial law?

I have no idea.

If you listen very carefully to the video posted below, you will hear the following message in the background…

The President is asking that citizens find safety and remain calm.

Authorities are working to contain the outbreak.

Here is the video.  Watch it for yourself and see what you think…

So what in the world are we supposed to make of all this?(source)