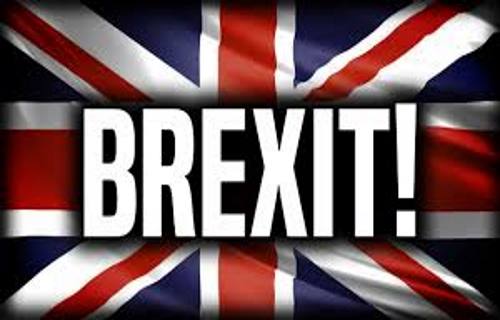 LONDON—Britain has voted to leave the European Union, stunning global financial markets and sending a seismic shock through the Continent.

The pound suffered its worst day in more than 30 years, plunging downwards, as DOW futures and other markets prepared for a huge jolt to the global financial system.

A leading anti-European Union campaigner, who had earlier said he expected to lose the referendum, reappeared as dawn broke over Britain to claim a dramatic victory.

“Let June 23rd go down in history as our Independence Day,” shouted Nigel Farage, leader of the U.K. Independence Party, with both arms held aloft.

As he spoke, billions of pounds was being drained from the British economy.

It was a tumultuous end to an extraordinary day in which thunderous storms and floodwater lashed Britain as the nation faced up to its most profound decision in a generation.
Despite a strong showing for the Remain campaign in London and Scotland, the majority of Britons voted decisively to quit the EU.

RELATED : Britain has voted to leave the European Union, stunning global financial markets and sending a seismic shock through the Continent.

“Let June 23rd go down in history as our Independence Day,” shouted Nigel Farage, leader of the U.K. Independence Party, with both arms held aloft.

As he spoke, billions of pounds was being drained from the British economy.

It was a tumultuous end to an extraordinary day in which thunderous storms and floodwater lashed Britain as the nation faced up to its most profound decision in a generation.
Despite a strong showing for the Remain campaign in London and Scotland, the majority of Britons voted decisively to quit the EU. 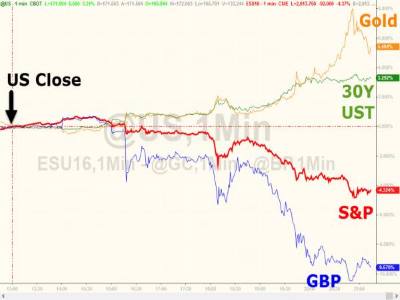 Britain is one of the central pillars of a pan-European union that was forged in the embers of the Second World War. It was initially reluctant to commit, but signed up in 1973 after another bitterly divisive referendum. Britain’s decision to quit risks the prospect of the entire union collapsing as nations like Sweden, Italy and Greece ponder their own referendum.
London’s financial markets have been in turmoil amid the uncertainty. As opinion polls lurched towards a Leave vote earlier this month, $150 billion was wiped off the value of Britain’s biggest companies in just four days.

The markets recovered many of those losses in the lead up to polling day, which meant a Remain victory was priced into the market and they were totally unprepared for what was to follow. So was Britain.

The New World Order & The ‘Order Out of Chaos’ Globalists .I know that there is still 21 percent of the population that believe in what they (the state-run media) promulgate through their lies, but let me set this straight, using words right out of the mouths of those I mean to expose:

“We are grateful to the Washington Post, the New York Times, Time magazine and other great publications whose directors have attended our meetings and respected the promises of discretion for almost 40 years. It would have been impossible for us to develop our plan for the world if we had been subject to the bright lights of publicity during those years. But, the world is now more sophisticated and prepared to march towards a world government. The supranational sovereignty of an intellectual elite and world bankers is surely preferable to the national auto-determination practiced in past centuries.”

We know that President George H.W. Bush, on Sept. 11, 1991, called for a “New World Order”, and keep in mind their method is “Order out of Chaos.” Who is creating the chaos? Those who are taking control after the chaos has been created.

Secret Societies and the New World Order
The plan to establish one world government is not new. It is a long established goal of those who practice the ‘Mysteries’. The Mystery Religion is the oldest of all the world’s religions. In fact all the worlds religions stem from the Mysteries except true Orthodox Judaism and true Biblical Christianity. The Mystery Religion stems back to ancient Babylon.

The Initiates of the Mysteries have a goal they term the ‘Great Work.’ They hold this to be a benevolent world dictatorship. It is the sort of benevolent dictatorship Adolf Hitler wanted. Adolf Hitler was himself an Illuminist and a member of the Thule Society. The entire SS were also initiates.

The ‘Great Work’ is a process of illuminating the human soul to a state of ‘apotheosis’. It will be completed when the whole human race achieves this state. The Mysteries hold to the Platonic ideal wherein humanity is a singular organism. Adherents view humanity as one collective being, and the individual must sacrifice for the benefit of the whole. Yet the individuals in question are you and me.

People are initiated into the Mysteries by degrees. Those who possess the correct attributes continue to rise to the higher degrees. This method of progression through initiation ensures the complete indoctrination of the initiate into the philosophical teaching of the Mysteries.

Who are these people? They are the members of all the various secret societies and fraternal organizations such as the Freemasons, Rosicrucians, Knights of Malta, Knights Templar, the Vatican and many many more. It should be stressed that the majority of the members of these secret societies are absolutely unaware of the true nature of their society, church or lodge. The higher initiates are known as the ‘adepts’ or ‘keepers of the secrets of all ages.’ The members may belong to any religion when they join the society, yet when they reach the higher echelons and become the adepts, I assure you they all practice the same religion.

One thing to remember with regards to these secret societies is that they are all the same at the higher levels. All the adepts belong collectively to what is known as the’Illuminati’ which means the ‘illumined ones.’ The Illuminati are those who have progressed through the various initiations in the particular branch of the Mystery Schools to which they belong until they have reached the stage of true illumination. Thus these people actually believe that what they are doing is right, just as Adolf Hitler thought that what he was doing was right and beneficial to humanity.

Saving our forefathers ways starts with people like you and me actually relearning these skills and putting them to use to live better lives through good times and bad. Our answers on these lost skills comes straight from the source, from old forgotten classic books written by past generations, and from first hand witness accounts from the past few hundred years. The Lost Ways Book teaches you how you can survive in the worst-case scenario with the minimum resources available, just like our forefathers did it for hundreds of years.

The worship of this religion is practiced in secret. The dogma and intentions of this religion are hidden by way of symbology. The average person sees the exoteric, outward or literal meaning of the symbols, while the Adept, Initiate or Illumined see the esoteric or hidden meaning of the symbol. For example if you study ancient history you will see that all the ancient cultures practiced sun worship. The average person (the uninitiated whom they term the ‘profane’) saw the sun in the exoteric and worshipped it as a god. While the High Priest saw the esoteric meaning and realized that the sun was only a symbol which represented a greater truth.

The movie, “2001, A Space Odyssey” was an esoteric message to the body of initiates. Very few people understood its true meaning. It was not meant to be understood by the profane. But the Adepts of the Mystery Schools understood it perfectly.

The ancient stories of Babylonian, Egyptian and Greek mythology have more meaning than most people realize. Archeologists and historians only see the EXOTERIC and thus miss the whole point of what it all really means. When George Bush referred to a “Thousand Points of Light” in his speech in 1991 he was using the symbolic language and was referring to the body of initiates. When Bill Clinton in his State of the Union Address was speaking of about the “setting sun and then the dawning of the new era” he was also using symbolic language. The average person heard the exoteric meanings of these statements while initiates the world over smiled to themselves, as they understood the true meaning. You see George Bush is a member of the Order of Skull and Bones Society. Bill Clinton holds the 33rd degree in the Masonic lodge. Bob Dole, a Republican, is a 33rd degree Freemason. So it doesn’t really matter for whom you vote, you are in effect voting for the Mysteries. These people and many others are all practitioners of the Mysteries and know exactly where the world is going. Many judges belong to secret societies. These people are everywhere and are all indoctrinated in the philosophy of the Mysteries.

These people believe they have reached a higher point in their evolution (another deception) and have the necessary wisdom to rule the rest of mankind. They believe there are but a few mature minds in the world and that those with the mature intellect need to guide humanity. They consider themselves ‘illumined.’ All this is true and can be verified in their own writings, this is what they believe. Unless you are willing to open your mind and research this topic you will continue to be deceived.

The coming New World Order is based on an occult philosophy known as the ‘Pure Lucifer Doctrine’ or ‘Illumine.’ The symbol for this religion is everywhere.

RELATED : THEY’RE COMING FOR THE GUNS! – How Will They Confiscate Your Guns?

Greece will again be in the news in 2016, as the government faces growing political opposition to pension, tax, and other structural measures it has committed to undertake as a condition for further financing. The timing of promised debt relief from its European partners remains uncertain, and in any case a reduction of future debt service (after 2021) is not going to provide a meaningful spur to growth in the near term. All this suggests a “Grexit” from the euro zone could again be a market-driving issue.

Outside of the euro zone, a U.K. vote on “Brexit,” now expected in 2016, poses fundamental questions about the future of Europe. Regardless of the outcome, the run-up to any referendum is likely to weigh on investment and market sentiment.

If European and global markets remain calm, Europe will continue its recovery. But any of a number of shocks, whether a hard landing in China, debt problems in Europe, or disruptions elsewhere, will create substantial pressure on policymakers at a time when the constraints on their ability to act are intense.