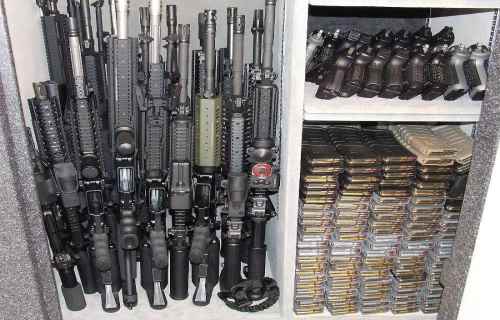 THEY’RE COMING FOR THE GUNS! – HOW WILL THEY CONFISCATE YOUR GUNS?

For decades I have heard gun owners claim that the government would never be able to confiscate our firearms because the government would lose too many men.  The implication being, of course, that gun owners would actively resist confiscation, even to the point of shooting back.  But I believe this thinking is outdated and doesn’t align very well with reality.  But before you tell me how big your honor guard in Hell will be when that day comes, let’s think about how the government could really do it.

Suppose, for the sake of argument, the government bans all civilian possession of firearms at the end of this month.  Congress passes a total ban and the President cuts his own re-election throat by signing it.  Gun owners get some grace period to turn them in, even beyond the deadline, without being charged with a crime.  If we use Australia and Britain as examples there will still be a significant number of firearms that are not turned in.  Some estimates put the Australian turn-in at less than 25% and the British faired only about 28%.  But Australians and the British have long been used to obeying almost every gun control law. Not so the Americans. When laws are passed that we don’t like, we bite. We scratch. We vote.  So here we sit after the guns have been collected and the amnesties have run out.  Now what?  Send out the personnel carriers, swat and shock troops to seize the guns from those militia “terrorists” who refused to turn them in?  Don’t be silly.

The government has lots of records about you. If you purchased a firearm since 1968, chances are that they have some record of it somewhere.  Most likely, it will take quite some time for them to compile all the serial numbers of “surrendered” guns (surrendered essentially at gunpoint) and cross off the ones you turned in.  It’ll take more time for them to attempt to “clean up” their data.  Say, about two years, maybe three. Add to that the hordes of people keypunching in hundreds of thousands of sales and registration records from hundreds of gun stores forced out of business.  At some point the government decides they have something approaching a “good” database of unaccounted-for guns.

The next thing you’ll get from the government is an official looking notice that they think you still have a firearm. Their information will probably include all the information from registration forms, right down to the serial number.  That notice will tell you that you’re in violation of the law, subject to prosecution and imprisonment.  It will give you some period of time to surrender the gun.  It will also give you a very limited number of days to return the form with an explanation of why you don’t have the gun, any proof you have, and your signature that the gun was lawfully disposed of.  For many people the idea that the government “knows” they didn’t turn in that pistol or rifle and they have the detailed information about it will be enough to get them to surrender the gun. Some people will ignore the letter, others will scrawl a note that “I sold this in 1982 in a private sale”. After some time, the government will figure out how many guns are still out there and what the “compliance rate” is with the gun ban.  More importantly, they’ll start sorting their database by the number of guns someone supposedly has “unaccounted”.

If you think they’ll come at these multiple-gun owners with a swat team, guess again.  Their most likely tactic will be yet another letter (maybe two more) that generate what they’ll call “insufficient responses”.  That means they can’t track a gun after you owned it.  This they’ll use as fodder for a search warrant and/or perjury charges at a later date if they can.  My guess is that the time between April and August will be a bad time for a lot of “former” gun owners. Remember that the BATF is an arm of the Treasury department and they control the IRS. You’ll probably get a notice in the mail that the IRS has some questions about your taxes or wants to audit you.  When you make the appointment to visit the IRS they will pass that information to the BATF. While you are sweating over your deductions, the BATF and local police will execute a search warrant and search your home looking for guns.  With you safely off site and distracted, essentially forced into “the royal presence” of the IRS they will snag your guns.  Expect them to use slow-scan and ground penetrating radar to search walls, yards, under the patio or deck, the basement, etc.  You might even find your hot tub has been drained and moved.  Yes, they’ll search your car in the IRS parking lot too.

If you are one of the those people they suspect of having multiple guns and they don’t find any guns at your home, expect them to find and search storage facilities, safety deposit boxes and other places you might use. Warn your relatives who live nearby that they can expect a visit too, even (or perhaps especially) if they never owned a gun. If they are thorough, I’d expect the government agents to check your neighbors to see which of them previously owned a gun and perhaps search their homes, arguing that your neighbor could have held  your guns while agents searched your home. Remember that at this point the government authorities don’t have much to fear from the general population. And by the time your complaints are run through the mill, rejected and turned into lawsuits, they’ll have changed the rules.

But you only have one gun you say?  Fine. They won’t come looking for it. But they will make sure that possession of ammunition is also a serious crime. Don’t leave any loose cartridges around and where will you hide that case of ammo you rushed out to buy? Expect any “gun parts” to be made illegal at some point in time too. Spare magazines, maybe even old cleaning kits. Anything that says “gun” will be interpreted as “probable cause” to search your entire home.  Also expect that you can never use that gun without becoming a serious felon in the eyes of the government.  Even if some thug has repeatedly stabbed you with a large knife and threatened to rape your six year old daughter, they won’t forgive you for having the gun.  They may even give you extra penalties for using it to save your family.  Especially if you are one of the first few hundred people caught this way, they will use you to “set an example”.  This will cause people to “bury” their guns away in hiding places, making them all but useless.  If the government does come to confiscate it, you won’t be able to get to it fast enough and they will probably find it.

You’ve moved several times since you bought a gun?  Remember showing your ID when you bought a gun? Remember writing down your place of birth? Why do you think the government has so many computers?  Linking you to your new driver’s license in another state shouldn’t be too hard. Besides, the Treasury folks know where you work. Think you’re safe because you had unregistered guns?  Think again. I would expect that the government’s database will contain a lot of old data.  Some of it might indicate that a gun was sold to a resident at your address.  If they can tie you to ammo sales or range use with your credit card in the previous 2 years you might get a surprise visit.  Or that seller might have remembered you bought that gun from him and filled out his gun notice to get “off the hook” for that gun.

The point of this article is that by thinking in limited terms of a “raid” to confiscate guns we lose sight of the alternative methods the government can use. Put yourself in the government’s position and think of your own methods to avoid a conflict.  Meanwhile, let’s ensure that every gun owner votes for gun rights this year and the next. You can think of a thousand excuses not to vote, not to help a campaign, not to help another gun owner register to vote. I can think of one important reason to do all of those.

Government has intervened in the individuals ability to reproduce, raise their young naturally and keep guns.
Help us spread the word about the liberty movement, we’re reaching millions help us reach millions more.

5 thoughts on “THEY’RE COMING FOR THE GUNS! – How Will They Confiscate Your Guns?”