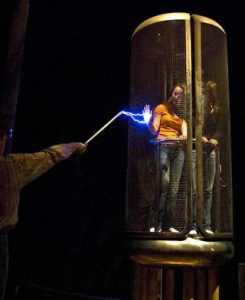 An electromagnetic pulse (EMP) is a wave of energy that follows nuclear detonations and threatens to fry your personal electronics. Could something already in your abode save your electronics from an early demise? Let’s answer this question as we look at the nature of electromagnetic pulses and if your microwave could prevent damage from an energy attack.

Ideally, a Faraday cage would divert the energy from an electromagnetic pulse and prevent damage to the electronics within. Faraday cages are containers made of a conducting material, typically copper or aluminum sheets or mesh, with the conducting material altering the alignment of electrical charges inside to counteract the incoming energy pulse.

Faraday cages are simple to make – the first consisted of a small room covered in metal foil, with the foil successfully countering high-voltage discharges from an electrostatic generator and preventing changes in the electrostatic environment inside. You can create your own Faraday cage easily, but you likely have one – your microwave oven.

Your microwave as a Faraday cage
Microwaves work by exciting water molecules in food, translating to an increase in temperature. Microwave ovens use non-ionizing microwave radiation at a frequency of 2.45 GHz (near the range of your cell phone), causing water in the your leftovers to absorb energy. As the water molecules absorb energy, the receive partial charges – a negative charge at one end and a positive charge at the other, causing the molecules to spin constantly. The water molecules start to hit each other, sending kinetic energy out as heat.

If a microwave did not act as a Faraday cage, the energy emitted by the magnetron would fry your eyes as you watched leftovers re-heat. If you look closely at the glass window, there are a series of holes placed in a metal screen to act as one side of a Faraday Cage, but still allow you to view your slowly rotating food. As a microwave oven uses energy with a frequency of 2.45 GHz, the wavelength of the energy is around 4 inches. As long as the holes in the viewing window are less than that size the energy is kept in the microwave, thanks to the three metal walls and metal mesh viewing window.

Since your microwave can keep the energy it generates within it’s three walls and a viewing porthole, it will do the same and keep anything inside of it (your cell phone, iPad) safe from the energy dispersed in an electromagnetic pulse.

The walls of the microwave are made of conductive metal, with the viewing hole similar to a mesh wall in a Faraday cage, making a microwave a hybrid Faraday cage. I measured the holes on my microwave and they come out to 1 milimeter; small enough to theoretically block a pulse with a frequency of up to 300 GHz. An electromagnetic pulse would give off energy with a variety of frequencies, but your microwave should block the bulk of them.

You can test your microwave by placing a radio or cell phone inside of a microwave (don’t turn it on!) and checking for signal. Can you call the phone in the microwave? How is your radio reception once inside? You are more than likely unable to make a call or get a signal. The type of electromagnetic energy used in a cell tower or radio transmission will be stronger, but your microwave might make for a good barrier against it. If you want to go even further, toss some electronic items you would need in a disaster in an old microwave and cover it in reflective metal tape to secure your microwave oven-turned-Faraday cage even more.

In the event of an EMP, the cord of your microwave (if plugged in) could also act as a ground, further helping discharge any energy. I would probably clip the cord or leave it unplugged so I didn’t actually microwave my cell phone in the middle of the night. You could also buy a broken microwave and seal it with additional metal tape on the edges to quickly make a Faraday cage for long-term use.

Aluminum foil vs. an EMP
A cheaper and more portable option comes in the form of aluminum foil. Faraday’s first experiment in 1836 used metal foil, and if you wrap a cell phone in aluminum foil, communication between the tower and phone will be cut off due to distribution of energy along the foil and it’s many creases.

The video above is an experiment shot testing the process (feel free to make fun of my Hulk figure in the background).
When one cell phone calls a target phone that is wrapped aluminum foil, the call is not received. As cell phone calls are transmitted using a form of non-ionizing electromagnetic radiation (bands in the range of 850 MHz to 1.9 GHz), this is a simple demonstration of a Faraday cage in action.

I’ll probably wouldn’t toss my phone in the microwave every night – knowing myself, I would will turn it on and re-heat some coffee in the middle of the night, transforming my phone into a plastic brick. But, in a pinch, an unplugged microwave serves as a nice deterrent to an electromagnetic pulse, and this attempt at debunkery fails. I doubt the charge on your phone will outlast the damage to your area’s communication infrastructure, but you can play Angry Birds or read comics on your phone until the battery runs out.