Never let a crisis go to waste. Especially a government manufactured crisis. The Elites needed a pandemic lie to shut the countries down.Now they have it. With over 3 billion… Read more »

The U.S. military government, known to the world as the administration of President Donald Trump, is about to declare martial law, Pentagon sources say. “The Cabal has been checkmated, as… Read more » 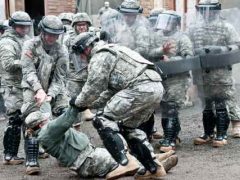