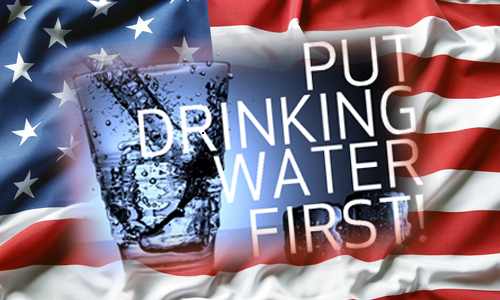 This new GAO report confirms what communities across

the country have known for years: drinking water is at risk.

Yesterday the Government Accountability Office (GAO) released an eagerly awaited report on the state of something called the Underground Injection Control program. This program, aka “UIC,” is designed to protect underground sources of drinking water from the underground injection of fluids, under the authority of the Safe Drinking Water Act (SDWA).
While fracking is exempt from the SDWA due to the notorious “Halliburton Loophole,” the underground injection of oil and gas wastewater is not. Wells into which oil and gas wastewater is injected are known as “Class II wells” in the UIC program. Oil and gas wastewater, including both fracking flowback and/or produced water, is injected into Class II wells either for disposal or to enhance recovery of residual oil and gas reserves.

The wastwater can contain benzene and other volatile organic compounds, heavy metals, radioactive materials, and more, and can be quite toxic. The GAO report evaluated U.S. EPA’s oversight of the Class II program. Some states administer the program because they applied for primacy and met EPA’s approval. In other states, EPA administers the program directly. GAO reviewed the program in six states that have primacy and in two states where EPA has primacy. Each state reviewed had among the highest number of UIC wells in their region.

Extensive investigations by ProPublica and complaints from communities in Ohio, West Virginia and Texas have made clear that the UIC program is completely unprepared to safely regulate the huge amount of dangerous oil and gas wastewater. That is why Natural Resources Defense Council has called for, among other things, federal regulations that would ensure this waste is subject to hazardous waste safeguards. This new GAO report confirms what communities across the country have known for years: drinking water is at risk. Here are some of GAO’s key findings:

At least 2 billion gallons of oil and gas wastewater are injected underground in the U.S. every day.
A “few” significant violations have led to contamination of drinking water sources, but GAO does not specify how many, where they occurred, or how they occurred. It is unclear if GAO was able to get these details.
More than 90 percent of produced water in the U.S. is injected into Class II wells.
Regulations for Class II wells have remained largely the same since 1980. While EPA reviews in 1988 and 1992 recommended changes, they were never made.
Federal grants to help states administer the UIC program have not increased since the 1990s.
Of the six states reviewed, four had less than ten Class II inspectors. There are more than 170,000 Class II wells nationwide.
EPA has identified six major pathways by which UIC wells can lead to ground water contamination, including faulty casing, an inadequate confining layer, and the presence of nearby wells that were not properly plugged.
Colorado does not collect information on the depth of ground water in the area surrounding the injection zone. Needless to say, this makes it much harder to protect the ground water.
Neither EPA nor states monitor groundwater quality over time to detect contamination from Class II wells.
New risks to ground water have emerged, including induced seismicity, overpressurization of formations, and the use of diesel fuel in fracking. Overpressurization is when too much waste is injected into a disposal well, causing pressure to increase to unsafe levels and the waste to back up onto the surface.
When it comes to diesel fracking, EPA may not have the chemical disclosure information it needs to ensure that UIC permits are being issued as required by law.
EPA does not consistently conduct annual on-site reviews of state programs due to insufficient resources, although these annual reviews have been identified as key to ensuring protection of drinking water sources.
EPA is not consistently incorporating new state rules into federal regulations as required. Without doing this, EPA cannot enforce all rules adopted by states to protect groundwater pursuant to federal law.
EPA is collecting data, but not enough to meet all requests from Congress and the public.
GAO also provides, in Appendix IV, a very helpful compilation of regulations from the eight state programs it reviewed.

GAO has made common sense recommendations to ensure that EPA oversight of the Class II program can effectively protect drinking water sources. As GAO points out, there will be ever increasing amounts of wastewater as oil and gas production increases. In addition to these recommendations, the oil and gas industry should be required to safely recycle all of its wastewater and manage all residual waste according to hazardous waste guidelines, thereby decreasing the demand for fresh water while also reducing the waste stream. There are many things the industry can do to reduce its environmental impacts, and they are often cost effective, but they will not happen without government action.