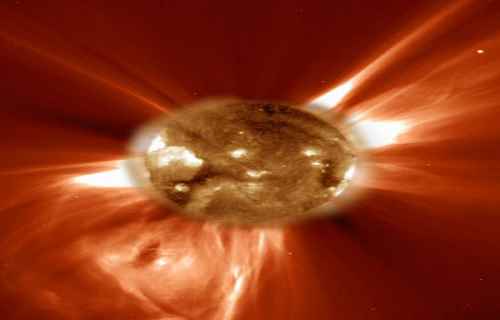 Despite that high profile scientist Nick Hodgson with NASA and the National Academy of Science had originally warned us about solar storms in 2014-2017 and it’s now 2016, we ourselves have no way of knowing one way or the other if any catastrophic events will take place such as solar storms, great earthquakes, super volcanic eruptions, pole shifts, planet crossers and so forth. There by we do not imply or make any such claims of pending catastrophic events, rather we simply report on the facts as we find them.

Nick Hodgson explains why individuals should study, plan and prepare for such a likely event, in order to avoid great hardship and hunger. Life insurance and protection requires many different approaches and this is probably one worst case scenario you have not thought of but need to. Whether it’s an atmospheric nuclear EMP from the Sun or a bomb. It is best to be aware of what can and will happen one day quite probably in your life time.

As you may know, back on March 10th, 2006 NASA’s own website issued a solar storm warning for 2012. Then in June of 2015 NASA reinforces their original 2012 warning telling the public to get ready for a once in a lifetime solar storm. Dr Richard Fisher, head of NASA’s Heliophysics Division said: “We know it’s coming but we don’t know how bad it’s going to be.” However, “the next solar maximum should be a doozy” says Dikpati. NASA say’s the sun storm will be in full swing around 2016-2017, however the National Academy of Science says, “The solar storm could start any day now.” “Who ever is right, the storm is coming!” says NASA.

Forget asteroids: Solar storm could ’cause apocalypse on Earth with just 12 hours warning’
The government has alarmingly admitted it is “woe fully underprepared” for a major solar storm which could cause plane crashes, train derailments, huge fires, mass power blackouts and satellite disruption.

A solar storm follows eruptions of mass and energy from the sun’s surface, including flares, sunspots, and coronal mass ejections which send huge amounts of X-rays and radiation towards Earth.

A coronal mass ejection (CME) is a massive burst of gas and magnetic field arising from the solar corona and being released into the solar wind.

Coronal mass ejections release huge quantities of matter and electromagnetic radiation into space above the sun’s surface, either near the corona (sometimes called a solar prominence), or farther into the planet system, or beyond (interplanetary CME). The ejected material is a plasma consisting primarily of electrons and protons. While solar flares are very fast, CMEs are relatively slow.

Near solar maxima, the Sun produces about three CMEs every day, whereas near solar minima, there is about one CME every five days.

When the ejection is directed towards Earth and reaches it as an interplanetary CME (ICME), the shock wave of the traveling mass of solar energetic particles causes a geomagnetic storm that may disrupt Earth’s magnetosphere, compressing it on the day side and extending the night-side magnetic tail. When the magnetosphere reconnects on the nightside, it releases power on the order of terawatt scale, which is directed back toward Earth’s upper atmosphere.

Solar energetic particles can cause particularly strong aurorae in large regions around Earth’s magnetic poles. These are also known as the Northern Lights (aurora borealis) in the northern hemisphere, and the Southern Lights (aurora australis) in the southern hemisphere. Coronal mass ejections, along with solar flares of other origin, can disrupt radio transmissions and cause damage to satellites and electrical transmission line facilities, resulting in potentially massive and long-lasting power outages.

Humans at high altitudes, as in airplanes or space stations, risk exposure to relatively intense cosmic rays. Cosmic rays are potentially lethal in high quantities. The energy absorbed by astronauts is not reduced by a typical spacecraft shield design and, if any protection is provided, it would result from changes in the microscopic inhomogeneity of the energy absorption events.

Additionally, solar scientists are concerned that this gravitational plane (that is the backbone to the Milky Way’s dark rift) may at some point send the sun on a rampage which always sets off powerful x-class solar storms and CMEs. (coronal mass ejections) It’s these x-class storms that have the ability to generate an EMP event (electromagnetic pulse) like the one that hit the Earth in 1859. Once that happens again with today’s technological world of electronics, the United States will go dark , along with the rest of the world.

Few New Yorkers have seen the aurora this far south but their fascination is short-lived. Within a few seconds, electric bulbs dim and flicker, then become unusually bright for a fleeting moment. Then all the lights in the state go out. Within 90 seconds, the entire eastern half of the US is without power.

A year later and millions of Americans are dead and the nation’s infrastructure lies in tatters. The World Bank declares America a developing nation. Europe, Scandinavia, China and Japan are also struggling to recover from the same fateful event – a violent storm, 150 million kilometres away on the surface of the sun.

It sounds ridiculous. Surely the sun couldn’t create so profound a disaster on Earth. Yet an extraordinary report funded by NASA and issued by the US National Academy of Sciences (NAS) in this year it could happened.

Over the last few decades, western civilisations have busily sown the seeds of their own destruction. Our modern way of life, with its reliance on technology, has unwittingly exposed us to an extraordinary danger: plasma balls spewed from the surface of the sun could wipe out our power grids, with catastrophic consequences.

“We’re moving closer and closer to the edge of a possible disaster,” says Daniel Baker, a space weather expert.

Similar to the bulletins put out by the NWS local forecast offices, SWPC provides Alerts, Watches and Warnings to the public at large about what to expect from Space Weather. These bulletins are levels of severity of the solar activity that can be expected to impact the Earth’s environment.
Additionally, solar scientist are concerned that this gravitational plane (that is the backbone to the Milky Way’s dark rift) may at some point send the sun on a rampage which always sets off powerful x-class solar storms and CMEs. (coronal mass ejections) It’s these x-class storms that have the ability to generate an EMP event (electromagnetic pulse) like the one that hit the Earth in 1859. Once that happens again with today’s technological world of electronics, the United States will go dark in about three minutes or less, along with the rest of the world.

It’s estimated that it will take at least six months to repair the grid. But the National Academy of Sciences estimates it will be closer to five years to repair it all. However populations in third world countries are use to growing their own food and should survive such an event much easier.
All we can say is that there is so much conflicting data out there, that it’s hard to know what to believe. But the fact remains that within the last three years the weather world-wide has become real crazy; earth quakes with greater intensity, many of which are in areas that are not known for earthquakes, with over seven and a half thousand weather records broken in the United States just in the month of May alone! And tornados now being reported in many parts of the world where there never use to be any tornados along with geomagnetic thunderstorms world-wide now being the new normal.
Meteorite storms of which is now starting to take place, sudden pole shift, Nibiru (aka planet-x), extreme weather, earthquakes, volcanic activity and the oceans of the world rushing across the continuants of the world resulting from a sudden pole shift.
There is no need to panic. Simply prepare yourself as best as you can, and hopefully nothing serious will happen. Civil unrest in the states is your biggest threat. But in case something does happen, you will have a head start in being prepared. We must keep in mind that should any one or more of these events actually happen, each and everyone of us will have no choice but to fend for our own food and water as well as protection from the elements and would be predators for months, possibly for years to come.

Academy Of Sciences says, “The solar storm can start at anytime.” Note: Once the { Emergency Impact Warning } is given by NASA, there should be a narrow 8 to 12 hour window to final impact. Unless you prepare in advance like NASA continues to warns you to, 8 to 12 hours is not enough time to fully prepare. Citizens should be prepared to supply their own food and water for at least 12 months or longer as there are a lot of unknowns here. Power failures world wide are expected and will take 1 to 3 years to get all power back up experts say. Some experts say closer to 3 to 5 years before all electric power would start.

RELATED : THE SIGNS THAT PLANET X, (NIBIRU) IS CLOSELY APPROACHING & PREPARING FOR !