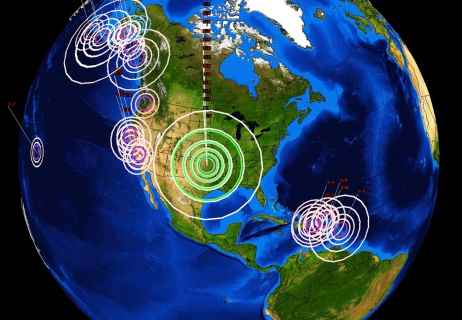 Oklahoma is now the No. 1 earthquake area in the world, an Oklahoma Corporation Commission spokesman said Monday.

Spokesman Matt Skinner said the state is unique in terms of frequency.

“We have had 15 (earthquakes) in Medford since 5 o’clock Saturday morning,” he noted. “We’ve got an earthquake issue.”

Skinner said the world is going through a seismic phase. 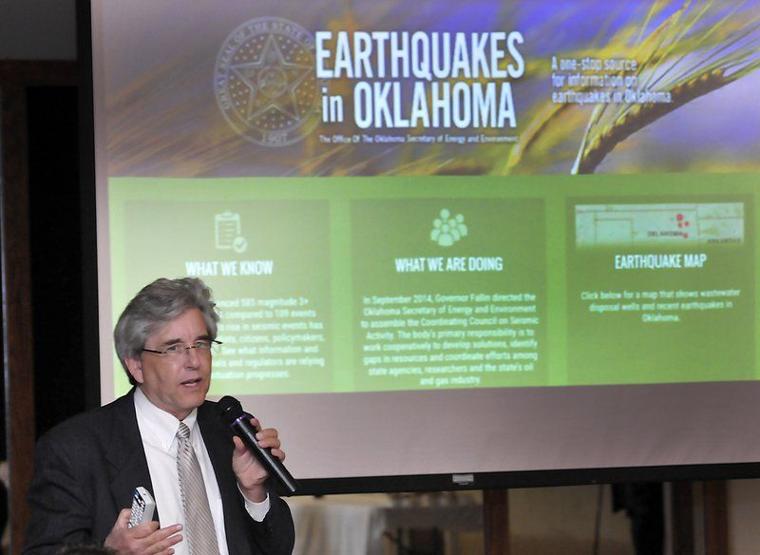 “Oklahoma is absolutely unique in terms of the number of earthquakes we’ve had,” he said.

Jim Palmer, OCC director of public information and manager of consumer education, said Oklahoma is unique in North America. He said there are other parts of the world experiencing enormous numbers of earthquakes.

“In North America, Oklahoma is very unique and unique in the world, in the sense that it’s concentrated so much in just one area,” Palmer said.

There is a tendency to make it an oil and gas versus earthquakes versus “whatever issue,” Skinner told members of Enid Rotary Club.

“This is an Oklahoma issue that is an earthquake issue. It is nothing more and it’s nothing less,” Skinner said. “For us, it’s an oil and gas issue as well, because that’s what we have jurisdiction over that the seismologists say pertains to earthquakes.”

In 2013, the oil and gas industry responded to a request from the OCC to consider providing 3D seismic data — which is proprietary, very expensive and absolutely protected by law, he said.

“And the industry responded in a huge way, and they don’t get enough credit,” Skinner said. “It was a few brave souls that came forward.”

A method for getting data from the oil and gas industry was set up, and Oklahoma Geological Survey receives the information and turns it into data OCC can use.

OCC cannot correlate a given seismic event to a given disposal well. When wells are shut down by OCC, it’s because the wells fit a risk profile, Skinner said.

OCC has developed areas of interest, where earthquake clusters have occurred. A cluster is two earthquakes within a half mile of each other, with one measuring at least magnitude 3.2. Originally, they were three-mile circles, then six-mile circles. The circles grew in number and now encompass a very large area of Oklahoma — about 9,000 square miles in all, he said.

There is concern about water being injected into the basement rock, Skinner said.

“It’s overwhelming data over 40 years, 50 years, that that behavior is not something you want to do in a seismically active state,” he said.

Most of the water going down a hole is from a producing well. It has to be disposed of in some way, and the preferred method of disposal is injection, he said.

“It came out of the ground, you’re putting it back in the ground,” Skinner said.

It is saltwater with other natural constituents, like arsenic and lead, he said.

“You really don’t want it out on the surface. You want to put it back down the hole. So, that’s done in the name of protecting groundwater, it’s protecting underground drinking water supplies and it’s worked quite well for a long, long time,” Skinner said. “However, now, we have a new thing to worry about, which is induced seismicity.”

In 2015, there has been significant activity involving OCC, Palmer said. More than 500 wells have undergone changes due to OCC directives.

“All we have is data,” he said. “In terms of this phenomenon, very little is really known.”

Skinner said OGS announced last week it was seeing a reduction in the overall earthquake rate.

“Now, this weekend may have blown that out of the water, I don’t know,” he said. “Again, based on the data, it would appear that even if you do the right thing, it’s going to take a long time. There’s no quick off switch.”

During the presentation, a map of disposal wells was shown. A meeting attendee questioned the lack of disposal in Osage County.

“We have no idea what’s going on in Osage County, it’s under federal control. The tribe owns the minerals and we have no jurisdiction there,” Skinner said. “We have no data.”

RELATED : The Five Major Killers in a Disaster

OGS does have seismometers there and they report there is no major seismic activity currently in Osage County, he said.

Another attendee asked at what earthquake magnitude should Oklahomans be worried.

Skinner said the OGS says a magnitude 5.0 “is the awful number.”

RELATED : How to Bug-In: What You Need to Know to Survive a Grid-Down Disaster

How to Survive an Earthquake

Bear Grylls gives tips on how to survive after an earthquake strikes and once you’ve been shaken, disoriented, and potentially trapped. (from Discovery Channel’s “Worst Case Scenario”)

How to Survive and Prepare for a Major Earthquake

RELATED : Foods to Stock at Home and in Your Disaster Supplies Kit