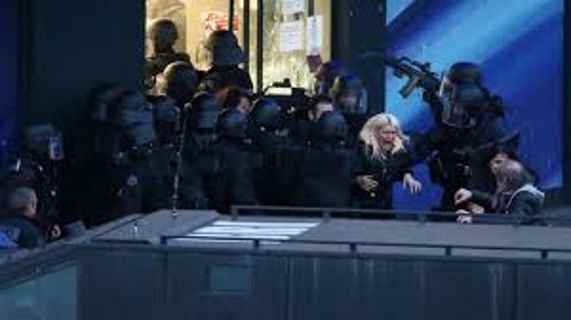 BREAKING: Police initially said there had been an explosion in a bar near a Paris stadium and a shootout in a Paris restaurant. Subsequent reports indicated that 6 different attacks took place.

RELATED : How To Survive The Coming Martial Law In America

-150+ people are reportedly dead.
-France has closed down and/or restricted traffic flow on their borders
-CNN and Fox have each spun the crisis in favor of the cabal’s agenda…installation of a “new world order”
-Obama takes the podium; mentions the “attack up humanity” & of course never once mentions anything about radical Islam; setting the stage for world leaders to have us all hold hands and submit to the new world religion of environmentalism.
-Paris attack coincides with anticipated arrival of world leaders who will converge in Paris for the COP21 Climate Change Summit

RELATED : Keeping Your Family Safe During a Terrorist Attack

RELATED : Are You Prepared In Case of a Terrorist Attack?

Timeline of terror attacks in France

France has been hit by several terrorist attacks this year. In January, two gunmen stormed the offices of Charlie Hebdo, a satirical magazine which had published cartoons of Prophet Muhammad. Twelve people were killed in the attack. Two days later, another assailant entered a kosher supermarket and killed 4 people, after killing a police officer the day before. In June, a driver rammed his car into a factory containing flammable liquids and caused an explosion. The attacker’s boss was found beheaded alongside flags containing Arabic inscriptions.

Deadly attacks hit Paris on Friday with at least 153 killed in gunfire and blasts. The attacks happened in at least six places across Paris. Here’s a look at what happened at each location of the attacks.

France: Hollande blames ISIS for ‘act of war’ against Paris

French President Francois Hollande gave a press conference from Paris, Saturday, after an emergency security meeting following Friday night’s attacks across the French capital which left over 120 dead and at least 200 injured.