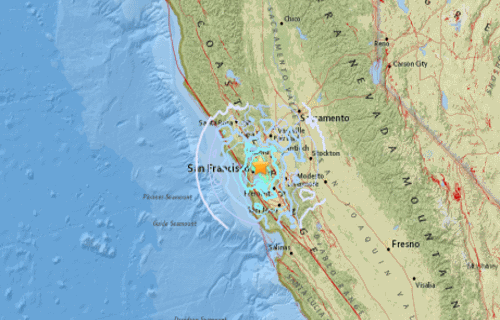 Just when it seemed like things may be settling down, two very unusual earthquakes have hit the west coast within the past couple of days.  A 4.4 magnitude quake struck Berkeley, California just prior to 3 AM on Thursday morning, and a 3.9 magnitude earthquake hit Mount St. Helens in Washington state on Wednesday.  Overall, there have been 68 earthquakes in the vicinity of Mount St. Helens since New Year’s Day, and there have been a total of 629 earthquakes in the state of California within the last 30 days.  Could it be possible that all of this activity is leading up to a historic seismic disaster on the west coast?

The 4.4 magnitude earthquake along the Hayward fault very early on Thursday jolted people out of bed all over the San Francisco area…

A strong 4.4 magnitude earthquake has rattled the Bay Area shortly before 3 a.m.

USGS is reporting the quake was centered in Berkeley. On KRON4’s real time earthquake map it shows the epicenter.

The quake struck at 2:39 a.m. and was centered near the Claremont hotel. The earthquake had a preliminary depth of 8 miles, according to USGS.

This wasn’t a soft and gentle earthquake that everyone kind of laughs about after it is over.

Rather, this was the kind of extremely intense earthquake that puts the fear of God into people.  In fact, one Bay area resident said that it “felt like a truck hit my house”…

“I was actually awake putting my shoes on for work. It felt like a truck hit my house from the back which pushed my against the staircase railing, the walls were cracking and threw my cell phone and keys down the stairs. Pretty scary”

If this was the worst quake in this particular swarm, it won’t ultimately be that big of a deal.

However, USGS Geologist David Schwartz is warning that this 4.4 magnitude earthquake could potentially be “a foreshock of something larger”…

“It is centered on about a five-mile-long section of the Hayward Fault that in the past 10 years has produced 30 earthquakes of magnitude between 3-4,” he told KPIX 5. “So it is a hot spot along the fault and this morning’s earthquake was the largest of that group.”

Schwartz said the real question in the hours after the quake was “is this a foreshock of something larger? That’s the concern.”

I have been writing about the shaking that has been happening on the west coast quite a bit lately, but I don’t think that people understand the seriousness of what we are facing.

Scientists assure us that the “Big One” is coming, and when it does arrive the devastation will be absolutely off the charts.  Just consider the words of seismologist Peggy Hellweg…

Speaking to Daily Star Online, seismologist Peggy Hellweg, from the University of California, said the region is not prepared to deal with the fallout from such an earthquake.

She said that a magnitude 7 or greater earthquake could kill “tens of thousands of people”.

In financial terms, such a quake would likely cause “tens to hundreds of billions of dollars in damage”, she said.

And remember, she is talking about a magnitude 7 earthquake in her scenario.

A magnitude 9 earthquake would be many, many times more powerful, and it would easily be the worst natural disaster in the recorded history of the United States.

Meanwhile, Mount St. Helens was hit with a very unusual 3.9 magnitude earthquake on Thursday, and some believe that this could be a sign that the volcano is “recharging”…

A series of 68 tremors, peaking with a magnitude 3.9 quake, have been detected in Washington state by scientists since New Years day.

The 3.9 quake is the second largest since 1981, the year after the natural disaster which killed 57 people and came minutes after a magnitude-5.1 earthquake.

Last month, seismologists at the University of Washington logged more than 80 quakes, four times as many as the average.

Earthquake swarms at Mount St. Helens are not unusual, but what we have seen over the first four days of 2018 has definitely gotten the attention of seismologists.

They are hoping that things will calm down at the volcano, but one seismologist did warn that “a larger quake could follow within 48 hours”.

We haven’t had a major volcanic eruption in the United States in a very long time, and so there is a lot of complacency out there right now.

But we should remember that the eruption of Mount St. Helens in 1980 was “the deadliest and most economically damaging volcanic event in the history of the United States.”  The following comes from Forbes…

Mount St. Helens is most commonly known for its major eruption in 1980, the deadliest and most economically damaging volcanic event in the history of the United States. The stratovolcano is situated just 96 miles from Seattle and 50 miles from Portland, making an eruption especially dangerous.

And Mount St. Helens is certainly not the only threat.  Personally, I am so concerned about a potential eruption of Mount Rainier that I even included one in my novel.

With each passing year it appears that our planet is becoming increasingly unstable.  Many believe that we have entered a time when seismic activity will be much higher than it has been previously, and that is going to have dramatic implications for our society.

Our tech industry is very heavily concentrated along the west coast.  When the “Big One” does finally strike, it could literally crash our economy overnight.

What the day arrives, are you ready for what will happen next?

Natural Healing Old Time Wisdom gathers useful and fascinating information on every practice of natural health and healing in one handy volume. This new edition, with a smaller trim, includes all the must-have information from the original edition including chapters on herbal healing, naturopathy, homeopathy, Eastern medicine, energy healing, mind-body healing, and healing with foods. Information within these chapters includes various methods and techniques for managing and curing hundreds of ailments, as well as for maintaining a healthy constitution year-round