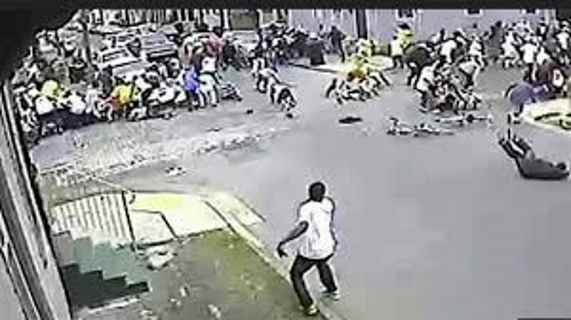 In a perfect world, no one would have to worry about the threat of violence when they go shopping, to work, to school, take public transit, or just go about their daily business. Unfortunately, we don’t live in a perfect world. The least we can do, among offering tips to help you make the most of your life, is to help you preserve it in an emergency.

As a very outspoken concealed-carry bussines women who is 99% sure this article will have an argument about guns in the comments, let me just be the first to say I completely agree that running away is the right thing to do. I don’t carry a gun in my home state, because apparently single women living alone who’ve been threatened in the past don’t have “good cause” to carry a weapon in self-defense (hey, I didn’t say I was above politics), but I do have out-of-state permits in other states where I travel frequently for work.

It’s really important to ask yourself why you would carry a gun, or a knife, or a Taser or pepper spray, or any weapon at all. At least in my case, it is not so I can play the hero. My gun is for self-defense, and there is nothing in self-defense that suggests running towards someone who’s shooting at people. If I can at all manage to get away safely, I’m happy to let the police do their jobs. I’ll try to be as good a witness as I can and help others escape if I’m in a position to do so, but I’m not going to charge into gunfire if I can at all avoid it.

I try not to be under illusion as to my odds of improving such a situation. A shooting would be chaotic, and loud, and confusing, and likely catch me off-guard. I’m not a trained soldier, and while I’ve trained with my gun, I’m not going to pretend I’m going to be a stoic, valiant hero in the face of violence. Someone threatened to kill me once, and after I got away, I threw up. That shit is stressful! If it’s in a public area there’s going to be people running around and panicking. The shooter may not be immediately obvious, or there may be more than one. Another person drawing a gun and running into the fray can easily cause more problems than it solves. For instance, what if the police are also entering the scene – or even other bystanders attempting to intervene – and see me with a gun? They don’t know who I am or that I’m trying to help. What if I see someone else with a gun, but they’re an armed bystander or a police officer? Point is, there’s going to be a lot of problems I’m not necessarily qualified to deal with.

RELATED : Give You, Your Family and Your Assets the Protection they need with the Best Home and Personal Self Defense

My gun is for self-defense, and if I’m using it, it’s strictly because I feel other avenues of protection, such as defusing the situation, getting help, or escaping are closed off or would pose even greater risk to life. So sure, if it’s the shooter or me, I’ll definitely choose them. If there was some sort of showdown, I’d make that decision – and not lightly, of course. But I try not to delude myself that such a showdown would very likely happen. I see too many fellow gun-nuts try to play internet-tough-guy and brag that they’d take the shooter down and save the day, and I find that outlook to be incredibly irresponsible. Myself, I’d be perfectly content to carry a pistol every day for the rest of my life and never, not once, ever have to draw it outside of a firing range.

Tips to Keep in Mind

Always carry some sort of weapon like a folding knife or extremely strong pepper spray.
You should always carry a flashlight with you so that if your attacker takes you to a stranded place and you somehow manage to escape, you have something to use for help or see in the dark.
If your attacker is armed, don’t try to intimidate him/her because this might provoke him to attack.
If your attacker is unarmed then give an impression that you’re not afraid and have the power to call for help or even fight back.
Teach your children how to respond in an emergency and give them code words to remember if they are ever in trouble. They, themselves should know a few tricks to attack someone. Yes, even children can be brave and powerful enough to strike back.
If you’re unfortunately stabbed or wounded then you should know how to provide first aid or stop an open wound from bleeding.

RELATED : It Should Have Been a Defensive Gun Use: Everytown for Gun Safety Illustrates the Need for Armed Self Defense Edition
Sometimes your best bet is to do as you’re told rather than fighting back. Trust your gut if it tells you that the attacker is extremely powerful and can cause harm.
Always keep some emergency numbers on quick dial and teach your children to dial 911 in emergency.
Before trying out any of these tricks make sure you’re not going to make things worse for you. Try to figure out your attacker’s size and physical strength before you just go about hitting him with a kick.
Although, it’s easier said than done but if you show your attacker that you’re stressed and panic he will take that as a sign of weakness and can attack you more easily.

How to survive a mass shooting – part 1

RELATED : Why Own a Gun? Protection and Self Defense

How to survive a mass shooting – part 2

But if you are unfortunate enough to find yourself in a mass shooting, heed this advice to help save your life.

RELATED : Profiling and Personal Defense: How to Assess Dangerous Situations