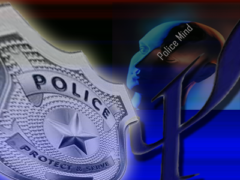 Are too many police officers currently suffering from engineered mental instability? The wave of police brutality in America and the world suggests this may be true, but just how big… Read more »