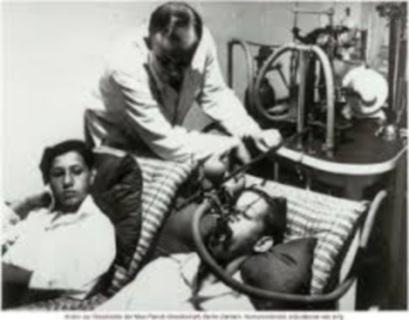 To make matters worse, EPA has been carrying out these egregiously immoral and unethical human experiments in which subjects are made to inhale freshly pumped-in diesel truck exhaust fumes without advising them of the risk to their health.
Such EPA-funded studies have reportedly been carried out at the University of North Carolina-Chapel Hill, University of Rochester (N.Y.), University of Southern California, University of Michigan, and elsewhere.

It is social engineering of the worst sort carried out by left-wing bureaucrats who view people as objects or playthings, not as individuals. It is also consistent with the profoundly misanthropic ethos of environmentalism, a movement that was already radical 25 years ago but has become outright totalitarian in its goals since it was taken over by neo-Marxists around the world following the collapse of their ideal state, the Soviet Union.

The news, which has largely been ignored by the mainstream media, comes amidst the EPA’s draconian crackdown on wood-burning stoves (that will probably lead to a crackdown on fireplaces too eventually).

The disturbing finding that Americans have been subjected to dangerous toxins for political gain is contained in a new investigative report by The Daily Caller’s Michael Bastasch.

The article comes on the heels of a new report by the EPA’s Office of the Inspector General (OIG) that says the EPA’s experiments exposed individuals, including those with asthma and cardiac problems, to pollutants such as diesel fumes in quantities up to 50 times greater than the levels the agency deems safe for humans.

None of the $12-an-hour test subjects has died (yet) but some of them have experienced significant health problems.

After being exposed to “ambient air pollution particles” in 2010, an obese 58-year-old woman with medical problems and a family history of heart disease had to go to the hospital. One volunteer patient was exposed to ozone for 15 minutes and developed a nasty cough while two other experienced “cardiac arrhythmias” during testing.

The dangerous taxpayer-funded experiments were unearthed in 2012 by pseudoscience debunker Steve Milloy. Using the Freedom of Information Act (FoIA), his website, JunkScience.com, got its hands on the results of tests EPA quacks conducted on people who were exposed to high levels of airborne fine particulate matter – soot and dust that scientists refer to PM2.5.

In congressional testimony in late 2011, then-EPA Administrator Lisa P. Jackson told a congressional committee in effect that her agency was putting at risk the lives of study subjects.

“Particulate matter causes premature death. It doesn’t make you sick. It’s directly causal to dying sooner than you should,” said Jackson who is infamous for using secret pseudonymous email accounts in to conceal her official activities from FoIA inquiries and Congress. EPA claims that PM2.5 can kill those who inhale it within two days of exposure.

“If we could reduce particulate matter to healthy levels it would have the same impact as finding a cure for cancer in our country,” Jackson added.

“Got that?” Milloy wrote. “Airborne dust and soot don’t make you sick, they just kill you – virtually upon exposure.”

So is it true? Is particulate matter dangerous or not?

One manager who oversees the human experiments told the OIG that “the exposure risk for healthy individuals is minimal” and that a person breathing 420 micrograms per cubic meter for two hours “would inhale the same concentration as they would breathing 35 [micrograms per cubic meter]” which happens to be the EPA’s 24-hour regulatory standard for outdoor PM2.5 levels.

The manager added that “PM risk is focused on susceptible populations and that the risk is small for those with no overt disease.”

The EPA carried out five experiments in 2010 and 2011 to examine the health impact of particulate matter, or PM, and diesel exhaust on people. Although the newly released OIG report found that the EPA did obtain consent forms from 81 people in five studies the “exposure risks were not always consistently represented.”

“Further, the EPA did not include information on long-term cancer risks in its diesel exhaust studies’ consent forms,” the report continued. “An EPA manager considered these long-term risks minimal for short-term study exposures” but “human subjects were not informed of this risk in the consent form.”

The EPA has been conducting these controlled exposure studies for about 40 years, according to the OIG report. The report continues:

“In controlled exposure studies, human subjects are intentionally exposed to pollutants under controlled conditions. These studies allow investigators to isolate and explain health events related to such exposures. According to National Health and Environmental Effects Research Laboratory (NHEERL) guidance, the studies can also help estimate ‘safe threshold exposures for humans.’”

Three EPA studies administered high levels of PM to subjects and two of the studies exposed individuals to large quantities of diesel exhaust and ozone.

Although the EPA maintains that particulate matter harms human health, the agency downplays those health risks in the scientific studies it conducts on real, live people.

“This lack of warning about PM is also different from the EPA’s public image about PM,” said the Inspector General’s report.

In other words, the EPA says one thing about these pollutants to the public and something much different when its officials testify on Capitol Hill.

This duplicitousness outrages Milloy. He previously opined:
“Which do you find more shocking: that the Environmental Protection Agency conducts experiments on humans that its own risk assessments would deem potentially lethal, or that it hides the results of those experiments from Congress and the public because they debunk those very same risk assessments?”

It’s a fair question to ask.

The EPA’s schizophrenia on particulate matter is explained by the Obama’s administration animus toward private industry and markets in general. The agency has been crying wolf while it argues for tougher regulations governing PM2.5, which would undoubtedly hurt businesses, kill jobs, and suffocate the economy.

The EPA has moved forward at full speed in its regulatory rulemaking regarding regarding PM2.5 without bothering to wait for its own Inspector General to complete a review of the experiments it conducts on people.

“Maybe the biggest reason to slow down the new rule is that the EPA is talking out of both sides of their mouth,” Sen. David Vitter (R-La.) said previously. “On one side exposure to it is deadly, and on the other they say human exposure studies are not harmful.”

Critics say EPA is either doctoring the science surrounding PM2.5 to further its regulatory agenda or exposing individuals to dangerous pollutants for minimal scientific gains.

“It’s alarming how the EPA is purposefully and blatantly ignoring an ongoing investigation of the legality and therefore scientific legitimacy of the use of human testing,” Vitter said. “This is another example of the EPA continuing to pick and choose scientific ‘facts’ to support their overreaching agenda.”

EPA has long believed that particulate matter can kill. The OIG report references a 2003 EPA document that warns that even brief exposure to PM can lead to heart attacks and cardiac arrhythmias in individuals with coronary disease. Long-term exposure supposedly reduces lung function and can cause death. A 2006 EPA document provides more links between short-term PM exposure and “mortality and morbidity.”

The EPA regulates particulate matter which itself is a “mixture of harmful solid and liquid particles.” PM of 2.5 microns or less, which is about “1/30th the thickness of a human hair,” enter the human respiratory system and can harm or even kill a person after a brief exposure.

EPA policy is to warn people with respiratory or heart diseases, the aged, and children to stay indoors when PM2.5 levels register between about 250 and 500 micrograms per cubic meter.

The EPA must be aware that moderate exposure to particulate matter is not harmful.

Yet the agency exposed research volunteers to PM levels many, many times in excess of the norm to induce bodily harm and gin up some basis for its crackdown on PM.

What the EPA has done has echoes of the Third Reich to it.

During the research sessions, “subjects are cordoned off in a sealed chamber inhaling fine particle pollutants, including diesel exhaust that is piped in from an idling diesel truck.” The experiments “demonstrably violate universal ethical, medical and legal standards of civilized medical research, including The Nuremberg Code, The Declaration of Helsinki, and ‘The Common Rule’ of the US Code of Federal Regulations.”

The Alliance believes “it is not an overstatement to compare these wholly non-therapeutic poison inhalation experiments, conducted by EPA scientists and EPA-funded academics, to the experiments conducted by the Nazi doctors who were tried and convicted at Nuremberg.”

The Alliance statement continued:
“EPA exploited human beings who were used as a means to an end. They were deliberately exposed to poisonous substances–against their best interest–in order to determine the degree of harm the mixture of pollutants and diesel gas produce in human beings. These unconscionable experiments were conducted by medical doctors and academic scientists–they violate all ethical, medical and legal codified standards of civilized medical research.”

It’s pretty hard to argue with that.

Proof that Chemtrails Are Real