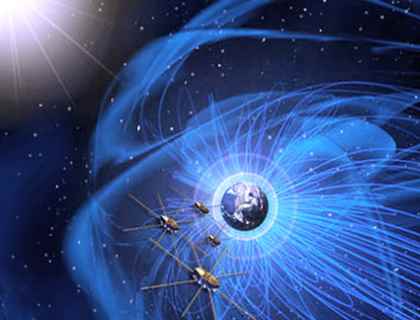 The potential for a devastating EMP resulting from a massive solar event, or a man made weapon, is well known and, increasingly, being taken seriously as a looming, perhaps inevitable, disaster.

Surprisingly, there are actually voices in Congress urging Washington to prepare for all contingencies and to upgrade the power grid and infrastructure to better deal with an event that could easily disable the entire system – perhaps even for an extended period of time.

At its worst, an EMP could result in the deaths of 90% of the population, whose lives – utterly dependent on handouts from the system and services from the fragile infrastructure – would be unsustainable without the electric grid.

RELATED : Dangers Of An EMP Attack & Palmistry – Which Could Knock Out The Electrical Grid

One half of that equation deals with the potential for solar flares, or coronal mass ejections, and other extreme space weather events to cause interruptions in Earth’s magnetosphere, in turn creating electrical discharges that have the potential to disrupt satellites orbiting the planet, and trigger outages in the electrical grid and most of the electronic devices on earth’s surface.

However, the exact mechanisms of the magnetosphere are little known to science, and even the most powerful computers on the planet. The NY Times writes:

The equations describing magnetic reconnection can be written simply but not solved. Even the biggest, fastest computers cannot establish what is going on. Thus, scientists are looking to the $1.1 billion NASA mission to provide measurements to guide them.

With this in mind, NASA is scheduled to launch its Magnetospheric Multiscale mission this week, a 2-year probe that will send four octagonal spacecraft flying in pyramid formation into the magnetosphere to record 3D images and collect massive amounts of data on magnetic reconnection.

Why and precisely how relatively minute magnetic lines “pop” and reconnect under stress from solar flares, et al., is the object of study. The MMS mission plans to capture these events and hopefully to understand them. The Christian Science Monitor explains:

“Exactly how magnetic energy is destroyed in a reconnection event is completely unknown,” Jim Burch, MMS principle investigator, said in a news briefing on March 10.

In some instances, magnetic reconnection near the magnetosphere can send particles hurtling toward Earth’s atmosphere, and generate one of the most stunning natural phenomena on Earth: the auroras. But magnetic reconnection can also create geomagnetic storms that send electric surges down to the surface and into power grids, potentially shorting out those grids and causing blackouts. These showers of intense particles can also pose a radiation hazard for astronauts in orbit.

As the New York Times explains:

In space, the realignment releases energy that accelerates and heats the cloud of charged particles, which scientists call plasma.

“It’s sort of like pounding down on a tube of toothpaste,” Dr. Dorelli said. “That thing just collapses very rapidly, and it squeezes the plasma out very rapidly.”

RELATED : Crippling the US Without Firing a Shot: The Electrical Grid May Well Be The Next War’s Battlefield

When a giant solar explosion arrives at Earth, the squeezed particles race around the planet to the tail of the magnetic bubble over the night side. That sets off more magnetic reconnections, shooting particles back at Earth that induce electrical currents in the ground. The currents can flow into electrical transmission lines, potentially overloading transformers and causing continentwide blackouts.

Perhaps understanding magnetosphere pops and reconnection will allow science to predict the timing and scale of effects, in turn making possible an accurate warning system to alert of potential outages and disasters that solar weather could bring. It may even allow for better defenses against its effects.

The deluge of data could help scientists better predict the timing and effects of solar storms.

“We’re trying the find those hot spots out in space,” Roy B. Torbert, deputy principal investigator for the mission, said at a news conference Wednesday at Kennedy Space Center in Florida. “We do not understand at all what causes the dissipation in plasmas.”

Any tangible results, however, are years away from being put into practice. Meanwhile, an EMP or massive solar event could come at any time.

As SHTF has reported numerous times before, a single event could make life unlivable for all but the most prepared. Are you one of them?

Frank Gaffney, the president of the Center for Security Policy, is even more pessimistic. He believes that a single EMP blast could potentially end up killingalmost the entire population of the United States…

“Within a year of that attack, nine out of 10 Americans would be dead, because we can’t support a population of the present size in urban centers and the like without electricity”

As a society, we are simply not equipped to function without electricity. Dr. William Graham was the chairman of the government commission that I mentioned above, and he says that a giant EMP blast could knock the United States back into “the late 1800s” in just a single moment…

Life after an EMP attack “would probably be something that you might imagine life to be like around the late 1800s but with several times the population we had in those days, and without the ability of the country to support and sustain all those people,” Graham says. “They wouldn’t have power. Food supplies would be greatly taken out by the lack of transportation, telecommunication, power for refrigeration and so on.”

This very real possibility makes prepping for disaster all the more important.

That means food, weapons, back-ups, planning and lots of prayers.

For electronics, it also means some due diligence that could mean the survival of at least some of your equipment. While nearly everything you can think of from the modern electrical world can and will fail, Faraday cages and similar enclosures are believed to be protective enough to survive an EMP.

This means individuals can create stores of back-up electronic equipment that may well be workable and vital on the other side of aftermath.

The Survival Mom outlines some of the storage devices you want to plan for and implement. Keep in mind that none of this has been tested in a real world scenario before, so don’t put all your eggs in one basket:

And what should these be stored in? Well, again, most every expert has differing opinions. We have a few Tech Protect Bags and a metal trash can. Here are some other options:

If/when an EMP or CME occurs, there is no going back for a “re-do”. Whatever works, works. Whatever doesn’t, doesn’t, and there will likely be no way to make repairs. Because of that, I highly recommend taking these precautions.

Again, no one can say for sure if any of this is foolproof. More importantly, unless you have invested heavily in power generation – and have protected, backup solar panels and/or other equipment – you plan for powering your saved devices could also fail.

Instead of trying to live the exact same life you are living right now, only fueled by an individual generator, look for low-tech solutions instead. When things change dramatically, accept the change and adapt to it, instead of trying to maintain the illusion that everything is the same.

Whether you can get power from an outlet in the wall or not, the necessities of day-to-day life will remain the same:

The ultimate preparedness goal should be to provide those necessities without any help from the power grid, generators, or fossil fuel. (LEARN MORE about planning for a long-term disaster)(source)