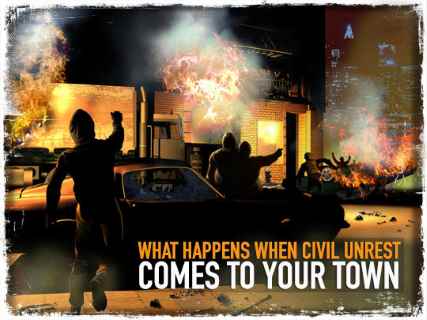 What Happens When Civil Unrest Comes To Your Town

Protests, peaceful protests, have been used successfully in the past in this country to enact change usually change within the government. The United States was essentially formed out of protests and uprisings by the common people that felt, and then realized they were being suppressed.

In some countries protesters, peaceful or otherwise are summarily shot, and/or beaten, and incarcerated for simply speaking out.

Politicians and governments can be swayed by peaceful protests, but once the protests turn violent the game changes. Whatever policy the peaceful protester were looking to change has been forgotten in many cases.

Once a group is gathered the individual is no longer. Now the group is governed by “mob mentality”. The group will do things as a whole that some individuals would not consider doing on their own.

In most cases it gets out of control quickly, and of course the instigators are pacing back and forth at the fringes whipping the mob up to do bigger and greater things, destructive things in some cases.

It snowballs and then feeds upon itself, because it creates its own energy. Soon others that have no idea, or do not care what the original intent was, are now scattered throughout the groups, and in some cases are only there to create chaos.

READ : A Prepper’s Guide in Safeguarding a Home

What Happens When It Comes To Your Town

First, be prepared to have people, friends and family you thought you knew to change. Their opinion on the matter may differ from yours, and this can create problems in your workplace, within your group of friends and even within your own family.

Something happens, people are outraged, but not everyone finds it outrageous, but people have learned that the squeaky hinge gets the oil (the attention). Groups realize they need a loud voice to be heard and an outrageous act in the name of another outrageous act gets the coverage.

However, there is a tipping point that where if a hinge squeaks too much it gets replaced. It is dealt with, and in the case of protesters getting out of hand, the police and the military step in and then things do get interesting and dangerous for everyone.

Immediately sides are drawn up. Everyone has an opinion and there will be degrees of outrage. Some people are concerned and want answers, but are willing to wait on the system. Others only see red and want revenge, and some just have to show the world how mad they are, they rebel against laws, and against those in charge, and soon they go after those simply trying to make a living in their own city or town. Everyone is a target at some point regardless of your opinion.

It would be difficult to protect yourself from this type of situation. In Baltimore it is alleged the police were told to stand down, let the demonstrator vent. If this is true then the citizens as a whole were put in extreme danger and essentially were on their own. You may very well be put into this type of situation in your town or city.

RELATED : Urban Survival: How To Survive During Rioting and Urban Unrest

Because the groups were so large no single person or even a small group of people could have stopped the looting and the burning without the help of the police, and it seems help was not forthcoming.

There is a breakdown in society when the police give up and stand by. This is dangerous and sets a precedent for next time. The authorities claimed they did not realize what would happen and thus were not prepared. They should have been prepared based on events in the past in other cities. It would appear they did know, but did nothing about it. You however, cannot ignore the warning signs.

You need a plan that does not involve calling 911. You need to get your children from school if you suspect an event has happened that will cause civil unrest. Your kids are with you and if nothing happens all the better, but if something does, you need a plan to either get out of town or have a secure hiding place that has enough essentials for 10 days to two weeks.

You need a plan to get home from work and if the streets are blocked you need alternative routes mapped out ahead of time. You have to think of all possible routes and all what ifs. You cannot try to drive through the demonstrations. Keep your opinions to yourself and avoid the crowds at all cost as you make your way home.

You simply cannot rely on the local government or police to make the right decisions anymore. “Let it burn, it is only property” is not a policy you want to see enacted, but apparently it may be a tool now, and it may be used in your town.

READ : Best Self Defense Strategies For You And Your Family

You are put in a bad spot because if you use force to defend your property and life because the police refuse to help, you may be detained and then hauled into court at some point, there is no question of this. Unfortunately you have to avoid any confrontation with the demonstrators and police and/or military, and this may mean you would have to leave the area.

If your home is not in the path of the demonstrators however, then you could shelter in place, and this means staying off the streets. Monitor the news continually, and be ready to move if you need to. You cannot try to run to the grocery store for some last minute items. You need to have bags packed for everyone that can be carried, and enough supplies in the home so you do not have to leave. In some extreme cases you could expect disruptions in the utilities.

Be ready for fires in the area and monitor closely so you can evacuate well ahead of the danger. Be prepared to defend your home. Opportunist may test you and your home, and if you show force they may look for easier targets. Large mobs of course cannot be deterred, but unless your home is a specific target, and is not in the path of the marches or protests you can deter the opportunist.

For those that imagine they are Marshall Dillon and can step out on the porch with a rifle to disperse the crowd will get a brick upside the head, and if they do wake up may find their feet inside of a burning building.

Do not draw attention to yourself. You cannot get on the roof to fire warning shots, your home or building will end up on fire with you trapped on the roof. Go invisible, go dark, and have an escape plan.

It is only property so let it burn does have some merit when it comes to you surviving or not. You cannot defend against certain things, so you may have to abandon your property to save your life.(source)

Surviving Civil Unrest – Are You Prepared ?

RELATED : How to Survive The Collapse of Civilization

Global food shortages will become three times more likely as a result of climate change and the international community needs to be ready to respond to price shocks to prevent civil unrest.

Rather than being a once-a-century event, severe production shocks, including food shortages, price spikes and market volatility, are likely to occur every 30 years by 2040, said the Taskforce on Extreme Weather and Global Food System Resilience.

With the world’s population set to rise to 9 billion by 2050 from 7.3 billion today, food production will need to increase by more than 60 percent and climate-linked market disruptions could lead to civil unrest, the report said.

READ : Find out more about using cold weapons for survival on Bulletproof Home.

“The climate is changing and weather records are being broken all the time,” said David King, the UK foreign minister’s Special Representative for Climate Change, in the report.

“The risks of an event are growing, and it could be unprecedented in scale and extent.”

Globalization and new technologies have made the world’s food system more efficient but it has also become less resilient to risks, said King.

Some of the major risks include a rapid rise in oil prices fuelling food costs, reduced export capacity in Brazil, the United States or the Black Sea region due to infrastructure weakness, and the possible depreciation of the U.S. dollar causing prices for dollar-listed commodities to spike. 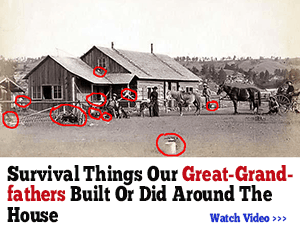