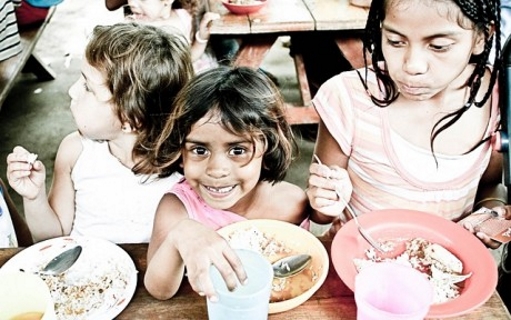 46 million Americans go to food banks, and long lines for dwindling food supplies begin at 6:30 AM

Those that run food banks all over America say that demand for their services just continues to explode.  It always amazes me that there are still people out there that insist that an “economic collapse” is not happening.  From their air-conditioned homes in their cushy suburban neighborhoods they mock the idea that the U.S. economy is crumbling.  But if they would just go down and visit the local food banks in their areas, they would see how much people are hurting.  According to Feeding America spokesman Ross Fraser, 46 million Americans got food from a food bank at least one time during 2014.  Because the demand has become so overwhelming, some food banks are cutting back on the number of days they operate and the amount of food that is given to each family.  As you will see below, many impoverished Americans are lining up at food banks as early as 6:30 in the morning just so that they can be sure to get something before the food runs out.  And yet there are still many people out there that have the audacity to say that everything is just fine in America.  Shame on them for ignoring the pain of millions upon millions of their fellow citizens.

Poverty in America is getting worse, not better.  And no amount of spin from Barack Obama or his apologists can change that fact.

This year, it is being projected that food banks in the United States will give away an all-time record 4 billion pounds of food.

Over the past decade, that number has more than doubled.

And that number would be even higher if food banks had more food to give away.  The demand has become so crushing that some food banks have actually reduced the amount of food each family gets…

Food banks across the country are seeing a rising demand for free groceries despite the growing economy, leading some charities to reduce the amount of food they offer each family.

Those in need are starting to realize what is going on, so they are getting to the food banks earlier and earlier.  For example, one food bank in New Mexico is now getting long lines of people every single day starting at 6:30 in the morning…

“We get lines of people every day, starting at 6:30 in the morning,” said Sheila Moore, who oversees food distribution at The Storehouse, the largest pantry in Albuquerque, New Mexico, and one where food distribution has climbed 15 percent in the past year.

Does that sound like an “economic recovery” to you?

Just because your family doesn’t have to stand in line for food does not mean that everything is okay in America.

The same thing that is happening in New Mexico is also happening in Ohio.  Needy people are standing in line at the crack of dawn so that they can be sure to get something “before the food runs out”…

Lisa Hamler-Fugitt, executive director of the Ohio Association of Food Banks, who has been working in food charities since the 1980s, said that when earlier economic downturns ended, food demand declined, but not this time.

“People keep coming earlier and earlier, they’re standing in line, hoping they get there before the food runs out,” Hamler-Fugitt said.

And keep in mind that we are just now entering the next global financial crisisand the next major recession.

Rising poverty is also reflected in the number of Americans on food stamps.  The following graph was posted by the Economic Policy Journal, and it shows how food stamp use has absolutely exploded in the five most populated states… 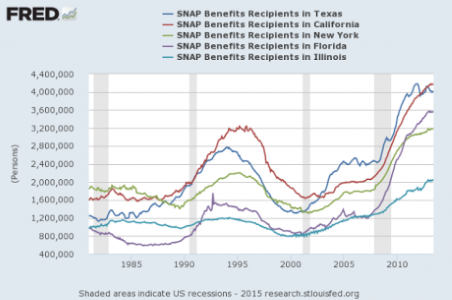 RELATED : Food Storage 101: What To Store

I don’t see an “economic recovery” in that graph, do you?

Instead, what it shows is that the number of Americans on food stamps continued to rise for years even after the recession ended.

Sadly, things are only going to get worse from here.  Eventually, the kinds of things that we are seeing happen in places such as Venezuela will be coming here as well.  At this point, young mothers in Venezuela are sleeping outside of empty supermarkets at night in a desperate attempt to get something for their families when morning arrives…

As dawn breaks over the scorching Venezuelan city of Maracaibo, smugglers, young mothers and a handful of kids stir outside a supermarket where they spent the night, hoping to be first in line for scarce rice, milk or whatever may be available.

Some of the people in line are half-asleep on flattened cardboard boxes, others are drinking coffee.

Most Americans cannot identify with this level of suffering, but it is coming to our country someday too.  Here is more from Reuters…

“I can’t get milk for my child. What are we going to do?” said Leida Silva, 54, breaking into tears outside the Latino supermarket in northern Maracaibo where she arrived at 3 a.m. on a recent day.

Just a couple of days ago, I wrote about how the number of Americans living in concentrated areas of high poverty has doubled since the year 2000.

In case you are wondering, that is not a sign of progress.

Just because you might live in a comfortable neighborhood that does not give you the right to look down on those that are suffering.

And when you add increasing racial tensions to the mix, it becomes easier to understand why there is so much anger and frustration in our urban areas.  According to Business Insider, the percentage of Americans that consider race relations to be in good shape in this nation has dropped precipitously…

Over the last two years there has been a 23% drop in the number of Americans who see relations between blacks and whites as “very good” or “somewhat good.”

Today, only 47% of Americans see black-white relations positively, according to a Gallup poll, the lowest it has been in the last 14 years.

The poll also showed that blacks see the relations more positively (51%) than whites (45%), but both percentages experienced sharp declines in the last two years.

All of the ingredients are there for civil unrest to erupt in cities all over the United States.

When the next major economic downturn happens, anger and frustration are going to flare to extremely dangerous levels.  At this point, it will not take much to set things off.

Desperate people do desperate things, and desperation is rising even now in this country.

So how did things get so bad?

Stupid decisions lead to stupid results, and very soon we will start to pay a very great price for decades of incredibly stupid decisions.(source)