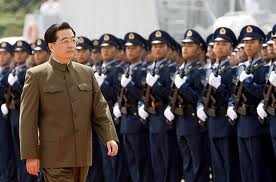 According to a Russian media report, at least 12,000 heavily armed Chinese troops have been moved to the border with Russia as tensions in the region continue to build.

The report cites the Russian FSB Border service as saying that Beijing began dispatching troops to the border on September 6, with 12-15,000 soldiers making the trip backed by heavy artillery.

According to a translated quote that the report attributes to a Russian border representative, it is not yet clear why the troops have been concentrated on the border but that “something smells bad.” It remains to be seen whether the reported Chinese troops movements are related to large scale Russian nuclear drills set to take place on the Chinese border later this month. Russia announced its nuclear forces will conduct a drill along the border with China later this month.
Russia’s nuclear forces will hold another large-scale exercise this month along the country’s border with China.

According to Russian media outlets, on Wednesday Russia’s Defense Ministry announced that the country’s strategic missile forces (RVSN) would hold military exercises sometime in the month of September.

“There will be more than 4,000 military personnel and around 400 pieces of hardware involved in the exercises,” Maj. Dmitry Andreyev, a spokesman for the Defense Ministry’s Strategic Rocket Forces, was quoted as saying. He added that the drills would be conducted in the Altai Region of Siberia.

The exercises will be led by Colonel-General Sergei Karakayev, the commander of the RVSN, and held jointly with Barnaul-based missile troops unit. Special forces units would play the enemy in the exercises.

In announcing the drills on Wednesday, Maj. Andreyev emphasized that air power would play a large role in the exercises. “It is the first time that an extensive use of the Air Force, including supersonic jets Mig-31, has been planned in the exercises of that kind,” he said. Russia will also use SU-24s for air reconnaissance operations during the exercises. Maj. Andreyev went on to say the purpose of the drills “is to practice operations to rebuff subversive activities and attacks made by a presumed enemy with the use of high-precision weapons and fulfill combat tasks despite the enemy’s strong radio-electronic resistance and active operations the enemy conducts in the area where the strategic troops are deployed.

Russia’s nuclear forces have been active this year, previously conducting a massive exercise in March and another one in May. Since returning to power in the Kremlin, President Vladimir Putin has stressed the importance of Russia’s nuclear arsenal even as he has sought to modernize its conventional forces.

As The Diplomat has noted in the past, Russia’s nuclear doctrine does not rule out the possibility of Moscow using nuclear weapons to counter a conventional attack against Russia itself or one of its neighbors. Throughout the Ukraine conflict this year, Russian officials have issued increasingly belligerent nuclear threats against Kiev and its Western allies.

Russia and China have been forging closer links in recent weeks and months, with the two super powers recently signing a $400bn deal for Gazprom to supply gas from Russia to China, the biggest natural gas deal sealed by Moscow since the collapse of the USSR. Work on the construction of the pipeline began last week.

Last week NATO also approved a “rapid response force” of 3,500 troops that would be situated at bases in Poland, Romania, and the Baltic states in a move that was widely seen as a further aggressive escalation aimed at Moscow.