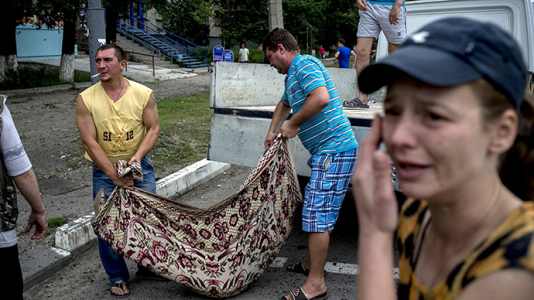 People in Lugansk carry the bodies of those killed during an artillery attack on the city (RIA Novosti / Valery Melnikov)
The number of killed and wounded in eastern Ukraine has doubled to 2,086 over the last two weeks, according to the UN’s “very conservative estimates”.

“This corresponds to a clear escalating trend,” UN human rights spokeswoman Cecile Pouilly told Reuters in response to a query.

Over 60 people have been killed or wounded every day, Pouilly added.

The Ukraine crisis has been widely described as a humanitarian catastrophe. According to the UN’s latest estimates, over 110,000 people have been internally displaced in the conflict. Moscow has reported that 730,000 people have fled across the border into Russia.

In Donetsk alone, more than 1,000 people have been left homeless due to the fighting, according to the city administration. In Lugansk, another regional center, 250,000 people can’t leave the city and have been without water, electricity, and communications for over a week.

The Russian humanitarian aid is set to arrive to the Russian-Ukrainian border by the end of Wednesday. However, the Ukrainian authorities repeatedly stated that they won’t allow the aid to pass – despite the Red Cross and the OSCE observers watching over the mission.