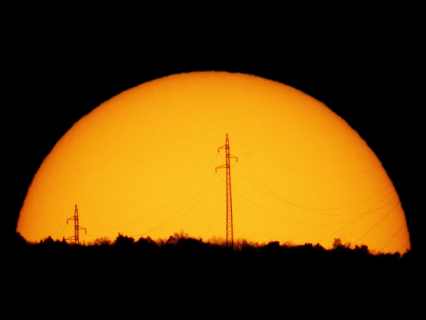 Not all is lost, though. Power utilities could try to take precautions if they had advance warning of a major solar storm headed their way. Using existing satellites, the National Weather Service’s Space Weather Prediction Center in Boulder, Colo., can detect an incoming event that’s about 30 minutes from hitting Earth.

SATELLITES CAN DETECT AN INCOMING STORM THAT’S 30 MINUTES AWAY

Grid operators would then have to react quickly. For example, PJM Interconnection operates a major portion of the US power grid from Illinois to the District, supplying power to some 60 million people. After receiving a warning, its human operators could redispatch electricity to reduce the flow of current from west to east. That would minimize the grid’s vulnerability to ground currents, Frank Koza, the executive director of operations support at PJM, said at a space weather conference in Silver Spring I attended back in June 2013.

But there’s a limit to how much strategies like those can help. “The one we’re really concerned about is extreme space weather, a Carrington-level event,” Koza said then. “What would happen in that scenario? I would have to tell you we don’t really know.”

In theory, there are technologies that could harden the grid and protect against stronger storms, such as capacitors that can help block the flow of ground currents induced by a geomagnetic event. In Quebec, the Canadian government has spent about $1.2 billion on these technologies since the 1989 blackout.

One downside is that many of these technologies are pricey and could make the current grid somewhat less efficient during normal times. “We’ve designed our power lines to work efficiently under perfect conditions — long transmission lines, high voltages,” Chris Beck of the Electric Infrastructure Security Council told me last year. Unfortunately, those characteristics also make the grid particularly vulnerable to a solar storm. There’s a trade-off.

In recent years, the federal government has started paying closer attention to the issue. In 2012, the Federal Energy Regulatory Commission issued an order that would eventually require grid operators to prepare both operational and technological responses to a space weather event. But utility executives think it could take a few years to bolster protection for the grid.
The destructive blackouts get all the attention. But solar storms and space weather can create all sorts of lesser havoc as well.

Take air travel. Nowadays, airlines run a number of commercial flights over the poles, such as routes between Atlanta and Tokyo. But if the companies get a last-minute warning from the Space Weather Prediction Center of a geomagnetic storm, the planes often have to divert their routes away from the poles or risk losing radio contact with the ground. These diversions can cost thousands of dollars.

Back in 2013, Joseph Kunches, a scientist at the Space Weather Prediction Center, told me that we’re still learning about other activities that could potentially be disrupted by various types of solar weather. Satellite communications can go awry. Pipelines can corrode from ground currents. Even human space travel faces a threat.

“Radiation is a big issue for space travel — particularly once you get away from the Earth’s magnetic field,” Kunches said. Astronauts working outside the Earth’s protective shield can be particularly vulnerable to bursts of solar radiation, which can have harmful health effects. That means that if we ever got serious about, say, traveling to Mars, we’ll need a better grasp on space weather.

And there are still plenty of unknowns, such as the potential impact of solar eruptions on GPS technology. It’s possible that even solar storms could degrade the signal as it makes its way from the satellite to the ground. GPS is built into so much of the modern economy — from navigation to geophysical exploration by oil and gas companies — that any interference with those signals could prove quite costly.
One big problem we face in preparing for space weather is that it’s unclear what we need to prepare for. Minor impacts and storms occur fairly often. But when might we expect a Carrington event? Or even something like the Quebec storm in 1989?

IF ANYTHING, OUR ALERT SYSTEMS ARE GETTING WORSE, NOT BETTER

In February, Pete Riley of Predictive Science Inc. published a paper in Space Weathersuggesting that the Earth has a 12 percent chance of getting hit by a Carrington-level event in the next 10 years. That’s definitely a number we’d like to pin down.

And there’s plenty more that space scientists are still trying to grasp. It’s still difficult to predict, for instance, whether a solar outburst will actually create a storm when it hits Earth. A great deal depends on how a coronal mass ejection interacts with other solar winds as it moves toward us. Kunches likened it to knowing that a hurricane is coming, but not being able to measure its barometric pressure.

Scientists who study space weather say it would be useful to have more spacecraft studying the sun, to give us more advance warning of storms. But, if anything, our alert systems are about to get worse, not better.

Right now, NASA operates four space satellites positioned between the Earth and the sun, which together can provide roughly 30 minutes’ warning of a major solar eruption. But these satellites are all reaching the end of their planned lives (and fuel tanks), and there’s only one replacement satellite scheduled to launch in 2014.

“There’s a real need for a truly operational, 24-hour-a-day, seven-day-a-week space weather observatory,” Daniel Baker of the University of Colorado told me last year. “But right now, we don’t see that coming from policymakers or the agencies that would have to step up.”

This piece was updated between Friday morning and Friday evening after the second coronal mass ejection hit Earth.

The Best Guide For Dehydration. How To Preserve Fruits, Vegetables And Meats.Everyone Should Know How To