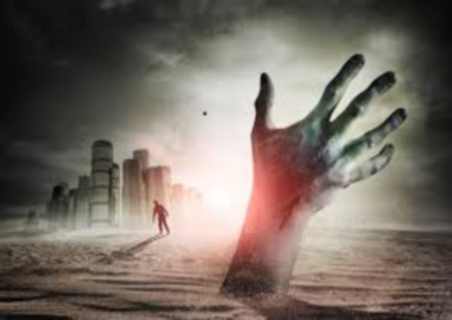 The electricity industry’s been abuzz recently about the need for a more resilient grid. As a result, microgrids are quickly becoming the industry’s topic du jour. However, nobody is talking about what is likely the most compelling reason to invest in microgrids: to prepare for the zombie apocalypse.

Scoff at your own peril, but consider this: Doomsday Preppers—a reality TV show about families who stock up on non-perishable food, ammunition, fuel, and more in preparation for a potential apocalypse, zombie-induced or otherwise—is the most popular series of all time on the National Geographic Channel, pulling in 1.3 million viewers for the season two premiere in November last year. We love to speculate about (and for some of us, prepare for) our own theoretical doomsday. Witness the June release of the Brad Pitt feature film World War Z, not to mention the popularity of The Walking Dead, Night of the Living Dead, Resident Evil… need we go on?

If (or when) such a day arrives, communities with microgrids will stand the best chance for survival. Why? A well-designed microgrid—combining distributed, renewable resources such as solar PV and wind with smart auto-controls and energy storage — would continue to provide reliable power with little human control, keeping the lights on, even under chaotic circumstances.

Such apocalyptic scenarios make it illuminating to conduct a “war game” exercise with our national infrastructure, and especially our electricity grid. What would be the first thing to go wrong with our infrastructure if society were thrown into disarray by brains-hungry zombies? Without human beings around to perform certain routine tasks, the electricity system will quickly cease to function. In regions dependent on fossil fuels for electricity generation (i.e., the entire U.S.), power plants will shut down, or “trip,” within 24 hours (or less) without continuous fuel supply. As soon as one plant trips offline, voltage at various points along the transmission system will drop below preset thresholds, spurring a domino effect as automated protection devices kick in and disconnect additional sections of the network. This cascade of trips would bring the system to a standstill, and a blackout would ensue.

Sure, this whole ‘zombie apocalypse’ thing may sound a bit far fetched, and it is. (Then again, have you seen the CDC’s zombie apocalypse preparedness 101 information? Or the tropical fungus/parasite that takes over ants’ brains and turns them into real-life ant zombies?)

In all seriousness, while walking dead may never roam our streets, catastrophic events can debilitate localized or even regional populations and leave our energy assets without sufficient operational personnel. However, the loss of operational personnel isn’t the only, and not even the most likely, threat to America’s electricity grids. Coordinated terrorist attacks on the grid (including cyber attacks) keep Department of Defense officials up at night; insurance markets worry about the impact of an intense geomagnetic storm on the electricity system, many communities have already experienced first-hand the havoc that Mother Nature can wreak on an unprepared power system (e.g., blackouts resulting from heat waves, superstorms such as Sandy), and just this week the North American Electric Reliability Corp. and some 110 utilities announced that later this year they’ll conduct a mock exercise to see how our power system could handle a coordinated physical and cyber attack on the high-voltage transmission grid. Zombies or not, it’s a cruel world out there, and our electricity grid is looking mighty frail.

Many critical facilities (e.g., hospitals, military bases) have on-site diesel generators to provide emergency backup power. However, these generators have a 40 percent failure rate, are usually designed to run for 24 hours or less, and require an operator around to babysit them. With no one there to refill the fuel tanks, check the oil, and perform other basic maintenance, most of these generators will not last more than one or two days. Without backup generation, basic services like water and sewage treatment cannot function. During the Southern California Blackout, San Diego’s sewage pumps backed up after less than 12 hours without power, bringing the city dangerously close to a real health crisis.

Dr. Alexandra von Meier, Director of Electric Grid Research at the California Institute for Energy and Environment, points out that sewage may be the least of our problems in a prolonged blackout: “Your mention of sewage pumping is very important. I might say that besides your drains backing up, traffic signals being out (doesn’t matter because gas station pumps aren’t working), and food spoiling, the most immediately life-threatening thing about a widespread blackout is that you find you have no water pressure in your tap. No drinking water, and it’s hasta la vista, baby…”

No People, No Problem: Automated, Renewables-fueled Microgrids Are a Robust Solution

Let’s revisit our zombie apocalypse war game scenario. This time, imagine you’re in a community with a microgrid that integrates renewable energy systems such as solar PV or wind, energy storage (e.g., batteries), and smart grid controls. What happens when people (but hopefully not you or us) start turning into zombies? With the right combination assets, the community’s microgrid could run on its own for days, weeks, or possibly even years … all with technology that is commercially available today! In addition to electricity, if your community were to invest in electric vehicles, as Indianapolis recently has, you’d also have mobility. Combine this with Tesla’s planned network of renewables-powered interstate charging stations, which Elon Musk has claimed could survive the zombie apocalypse, and you’d be good to go, literally.

Zombies Aside, the Move to Microgrids Should Begin Now

The United States’ electricity grid is fragile, much more so than most people realize. Zombies or not, the reality is that the threats facing our nation’s infrastructure are no joke. As we’ve illustrated, numerous critical services are deeply dependent on our electricity system, and recent events like Superstorm Sandy, Hurricane Irene, and the 2011 Southern California Blackout have made this clear. Should we be scared? Probably a little, but let’s take this as a call to arms: the time to reinvent our electricity system is now! Shifting toward automated microgrids that incorporate distributed, renewable energy sources represents the best opportunity to bring resiliency to our nation’s electricity system for the 21st century and beyond.

About author : James Sherwood is an analyst with RMI’s electricity practice. James comes to RMI having completed his graduate work at Stanford University in the Department of Civil and Environmental Engineering’s Atmosphere/Energy program. A 2011 M.A.P. Renewable Energy Fellow with RMI, James has great interest in renewable energy sources and their integration into the electric grid, as well as, more broadly, in sustainable planning, energy efficiency, and transportation.