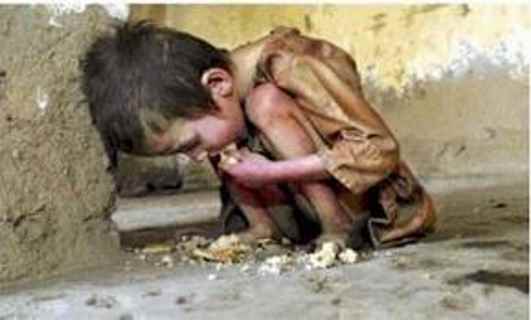 In a survival situation, food supplies are important. How long has it been since you have been hungry? How long have you ever gone without eating? After the basic necessities of shelter and water, food is the next item of concern. If you don’t have a good supply, and sometimes even if you do, hunger and even starvation is something that you must confront. When it strikes will you be prepared?

Panic is the first response of many individuals to hunger and the threat of starvation. It is helpful to know how the human body responds to hunger and starvation, how it affects one mentally and physically and how long one can go without food.

The period during and following major wars has been characterized by hunger, starvation and often death by starvation. The second world war saw the destruction of the food production and distribution infrastructure through all of Europe and Asia and affected the rest of the world including the United States. Everywhere the allied armies went, they encountered populations with their infrastructure damaged and unable to sustain them. They also encountered prison camps with large numbers of critically starved prisoners. They also took prisoners who had to be fed. The war effort quickly turned from fighting to providing relief in the occupied areas.

Obviously, starvation will lead to mental fatigue, but it does more than that. You won’t just feel tired, you’ll likely experience depression, anxiety, impatience, and nervousness. Your brain will start to have trouble producing serotonin, which can wreak havoc on your emotional stability. Ultimately though, apathy will set in. Nothing will make you want to quit more than being hungry, which is when you should be fighting harder than ever to survive.

What creates a food crises?
There are many reasons why people cannot grow or buy enough food to feed their families. Most of the reasons causing a food crisis are a combination of the issues below. A hunger crisis develops when families experience these factors for a long time and run out of ways to cope.

Not surprisingly, the hardest hit are the poorest – especially the urban poor, who can spend as much as 80 percent of their income on food.

POVERTY
When economy collapses the food will become scarce, like the North Korean famine 1994-1998.

Natural disasters such as floods, tropical storms and long periods of drought are on the increase — with calamitous consequences for the hungry poor in developing countries.
Natural disasters are very real and very likely to happen even more than once in a lifetime. When it strikes will you be prepared? It very well can happen tomorrow. And could last for four years like the Tempo Famine in Japan.

The HIV/AIDS pandemic in southern Africa has contributed to food shortages both through killing farmers, destroying critical local knowledge and pushing families deeper into poverty – thereby often cutting their ability to grow and produce food.
Food shortages are also often associated with widespread epidemics. Disease outbreaks such as the 2005 Ebola-like Marburg virus in Angola put pressure on food supplies as deliveries ceased due to drivers staying away. If a new deadly virus hits the USA, I don’t belive people will be leaving their homes.

Economy Based Food Crisis
In the First World War Germany capitulated because of its economic collapse. Families were actually starving back home: 763,000 German civilians died from starvation and disease caused by the Allied blockade. This is only an example, but there are hundreds of similar scenarios.

CONFLICTS
Food crisis are very often associated with conflicts. War makes delivery of food much more difficult, particularly if aid workers are attacked and supplies are looted. Conflict can drive people from their homes and away from their normal food supply, leave them unable to afford food or simply stop them planting.

How to stay prepared

Best ways to produce your food in a SHTF situation Produce Your Own Food :

That’s because the symptoms of starvation are often a gap in the knowledge and experience of the average prepper.  We need to prepare for the worst rather than just preparing to avoid the worst.

Finding Food After the Collapse – How Will You Feed Your Family After an Economic Collapse?