Despite that high profile scientist along with NASA and the National Academy of Science had originally warned us about solar storms in 2012-2013 and it’s now 2014, we ourselves have no way of knowing one way or the other if any catastrophic events will take place such as solar storms, great earthquakes, super volcanic eruptions, pole shifts, planet crossers and so forth. There by we do not imply or make any such claims of pending catastrophic events, rather we simply report on the facts as we find them.  This website gathers it’s scientific data from US government websites, including independent sources such as the National Academy of Science, NOAA, NASA, CNN, BBC, CBS News, NBC News, ABC News, MSN News as well as other space agencies. Please note that when we express our opinion on something, we make sure that we state that, “it’s our personal opinion that…”  this way the reader knows we are not trying pass-off our personal opinion as fact.  In the event something does happen within the next few years, we have put together a Solar Storm Survival Guide which can be downloaded. This is not a scare tactic, rather everyone should be ready for any kind of national emergency regardless as to whether or not 2014 and beyond hold any real threats.

As you may know, back on March 10th, 2006 NASA’s own website issued a solar storm warning for 2012. Then in June of 2010 NASA reinforces their original 2006 warning telling the public to get ready for a once in a lifetime solar storm.  Dr Richard Fisher, head of NASA’s Heliophysics Division said: “We know it’s coming but we don’t know how bad it’s going to be.”  However, “the next solar maximum should be a doozy” says Dikpati. NASA say’s the sun storm will be in full swing around 2012-2013, however the National Academy of Science says, “The solar storm could start any day now.”   “Who ever is right, the storm is coming!” says NASA.

By now you should have begun to notice major news agencies as well as talk radio are starting to cover this slow developing story detailing exactly what NASA’s warning actually means to the public.  If it turns out that NASA, along with other world scientist are is indeed right, “The Economic Damage In The United States Alone Will Be Twenty Times Greater Then Hurricane Katrina that hit New Orleans” says NASA. *Keep in mind that mankind is in uncharted water when it comes to knowing for absolute certainty what the long and short term effects will be, that is, should a super solar storm clash with modern civilization.

Find out more about the effects of an EMP and how to protect your devices on How to Survive an EMP.

If the earth in fact gets a direct hit by a solar storm producing x-class solar flares, (Coronal Mass Ejection or CME) …it can cripple the world in more ways then we can possibly imagine, as it will cause nearly every electronic device to no longer work until it gets fixed. Imagine no more working cell phones, cars, trucks, planes, ships, computers, navigation systems, TV, radio, iPods, or game machines, let alone no more advanced medical services. *Since more then likely there will be no electric power in most of the world for many months on end, there will be no modern banking system in place, no New York Stock Exchange, credit cards will be worthless and what cash, silver and gold you have will be king. Food stores will soon be looted in the name of survival, most gas stations can’t pump gas for what cars and trucks that might still be working. All forms of radio communication will no longer work during this period, making it difficult if not impossible for local law enforcement to maintain law and order, and National Marshall Law = (Rex-84) will be ordered that the public will be mostly unaware of.

Before you know it, the the city water and sewer system will stop working. If you are on an electric well pump, you lose your water right away, (unless it’s a hand pump) where as those in the city might have a few days to a week or so before they lose all their water pressure. Even worse, those who don’t have at least twelve to twenty four months of secured food and water, starvation will set in, which stands to kill hundreds of millions world wide if not billions; where as third world countries will not be as adversely effected. *Remember… most of the world population no longer supply their own food and water, rather people buy it. If food trucks don’t run, then they cant get the food to the stores. Even if somehow cars and trucks still worked, gas stations will be without power for months and thus unable to pump gas without having to run a costly generator. No doubt what gas their is available will be top dollar, easily exceeding ten US dollars per gallon in many locations world wide.

It will be one big nightmare if the earth takes a direct hit from a super CME, thus changing billions of lives forever. Leading countries like the US would be temporally setback well over a hundred and fifty years. But there are numerous things we can do to easily survive the coming solar storm rather then us becoming a victim. To better understand why NASA and other’s are forecasting a “doozy” , “once in a lifetime solar storm” in the first place.

We must keep in mind that it will take years to fully repair the damage electrical grid and power stations resulting from a direct hit of a perfect solar storm. This once in a life time solar storm event that NASA is warning everyone about is not to be taken lightly, especially if NASA and the National Academy of Science is indeed right.  It’s not so much that the solar storm itself is the real threat where as starvation and anarchy/chaos is the bigger threat.  Yes, some say that a direct hit from a massive CME could do environmental damage as well, possibly causing the side of the earth facing the sun to climb to unthinkable temperatures, possibly causing fires. But we think that might be a bit far reaching to think that way. Nevertheless, there are a lot of unknowns here and we will just have to see what happens, and just how bad it really gets. Taking shelter in a cave near you or underground shelter could in the end be your best bet, that is, if you want to play it on the safe side.

No one at an official level such as world leaders, are going to make any special announcement about the pending danger to earth, as to do so, would instantly cause world wide panic. People such as yourself who learn about the coming super solar storm now, are the ones that have any real chance at protecting themselves and family against this potential looming disaster that may begin to unfold at any time now. As for everyone else? For the most part the rest of the world population will be clueless and wont have any idea at first what happen when their electronic world comes crashing down around them.

NASA warns public to prepare for a, “once in a lifetime super solar storm event.” This event can start at anytime with little to no warning.

NASA’s Heliophysics Division said: “We know it’s coming but we don’t know how bad it’s going to be.” Guess what? It’s now 2012 and the Earth keeps getting slammed.

Are you ready and know what to expect, let alone how to prepare?

Do you know how to make a special safe room to protect you and family from prolong electromagnetic radiation which can be deadly?

Do you understand that most anything electronic will no longer work? This effects computers, phones, satellites, hospitals, even the electronic ignition system for cars and trucks.

Do you know what steps to take to protect your car from permanently breaking down from a powerful super solar storm?

Did you know that a super solar storm would knock out most power world wide for months and take years to repair it all, costing trillions in damages world wide?

Are you prepared with at least twelve to twenty four months of previsions for food, water, medicine and heating?

Are you aware that a killer super solar storm would lock down modern countries like the United States, Europe, Asia, and Canada for months?

Are you aware of that countries like the U.S. have an Anti Hoarding Act that effects you during a national crises? ((Learn how not to have your food purchases tracked))

Are you ready to fend for yourself as food stores most likely will not be in operation for months because of looters, gangs and no power, and especially a lack of food supplies?

Download the Solar Storm Survival Guide to learn how you can easily protect yourself and all of your electronics, as well as your car. It’s a condensed manual that can make the difference between becoming a victim or a survivor. Simply said; the guide offers lots of things that you wish you never new about, but will be glad you did should NASA and the National Academy of Science have this right.

The purpose of this website is two fold.  (1) To educate the general public about what will happen and what to do when a super solar storm hits the earth. (2) Provide a condensed solar storm survival manual that can make the difference between becoming a victim or a survivor. Simply said; the guide offers lots of things that you wish you never new about, but will be glad you did should NASA and the National Academy of Sciences be right. 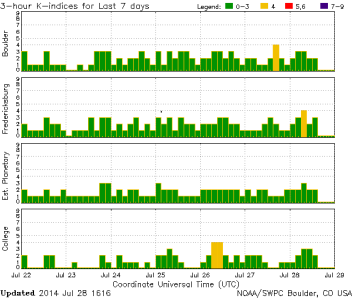 When all four graphs below hit 9, is when the sun has become extremely violent and a world-wide power blackout may be emanate.

National Academy of Sciences state that it will take at least six months to a year or more to get the electrical grid back up and running. Food stores will be bare within 2 to 3 days.