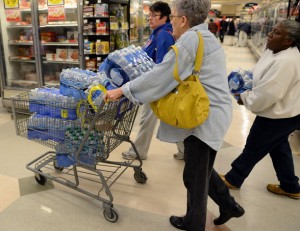 When will we wake up to the reality that we are standing at the cusp for very hard times? According to polls, the main concern among voters in this week’s elections was where our government and economy are headed.  Will things take a turn for the better now that the republicans are in the majority?  In this author’s humble opinion, it does not matter in the least who is in office or which party is in the majority.  We are still headed for an economic derailment of epic proportions.  And voting the republicans back into the majority will not put the breaks on what is to come. These economic problems have been a growing cancer for decades, we just chose to turn a blind eye, and as a result, the condition has grown terminal. There is nothing that can stop the inevitable.  James Rawles has a similar viewpoint.

On his widely popular Survivor Blog, he adds that, “ I recommend that you get practical and redouble your family preparedness efforts. We are heading into some very hard times, with plenty of drama. The US Dollar is doomed. There is now virtually nothing that anyone can do to stop it. So get busy:Get out of Dollars, and into tangibles, pronto!

Our terminally ill economy is just another symptom of the much larger problem that looms in the distance.  We have all heard whispers of a global food crisis. In fact, in the past 3 months food prices such as wheat, sugar, and coffee have all  increased exponentially due to failed crop seasons and the monetary stimulus being pumped into the economy by the Federal Reserve.  These symptoms that have reared their ugly heads are the beginning of the end – the end of the carefree American existence and the birth (and reality) of harder times. When America falls, so will other countries.

We were all fed a crock of bull.  We were told that we deserve a much grander way of life.  We all felt the high from the pipe dream they sold us, and we loved it. We were so fixated on this grandiose way of life that we were oblivious to the vulnerability of this nation.  We were duped into believing these erroneous ideas and at the same time it was going on we became complacent, and content.  But at the same time we were feeling the high, the drug dealers stole our way of life right out from under us.

Now that our complacent drug of choice has worn off, many have woken up.  And that euphoric feeling of complacency has now been replaced with anger.  Anger is a good motivating emotion and causes people to act.  And action is what this nation needs so badly.  Perhaps the anger should also be at ourselves for believing such deceitful tales.  There is also anger at the lack of concern we seem to be getting from the government.  The government seems to be more concerned with keeping up social graces than to admit to the noticeable struggles American families have to make ends meet.  My question to Washington is simply: If struggling American households have to cut back on extraneous expenses to make their budget work, why doesn’t the government do the same?  They have some of the best economists and accountants in the world, and they can’t control their spending?  Seriously!

The Hard Times Are Upon Us – Are You Ready?

Most American households are feeling the effects of the Great Recession… ahemDepression. A large percentage of households are already living below poverty line, and more are to follow. Those that have prepared realized early on that they could survive more abundantly by mimicking our ancestors way of life.  They have done the research and seen the logic in living away from cities, planting and raising their food, buying in bulk and storing food for later uses.  They have also learned ways to simplify their lives and their finances, and learned essential skills.  Those that were prudent will have a better chance at surviving an economic crisis, but the majority of Americans are still oblivious, and will struggle as a result.

It is never too late to begin preparing for unsettling times.  Disasters happen every day, to everyday people.  While the dollar still has value, begin purchasing needed supplies to live off of.  Here are some additional points to preparing for harder times:

In summation, the world is not going to end – literally.  However, the world as we know it is changing drastically.  And despite many Americans’ hopes, there is no “magic button” that can fix this mess, or for that matter, a group of newly elected officials.  The only way to get out of this is to brace yourself for some very uncomfortable years by preparing for them.  These changes will make the American dream harder to come by and alter our way of life.  The faster we adapt to these changes the better off we will be.  Despite the negative, and sometimes paranoid stigma given to preppers, these individuals saw the need to prepare for a day when they may be without.  That day is fast approaching.  Will you be ready?

This article has been generously contributed for your reading pleasure by Tess Pennington of Ready Nutrition.