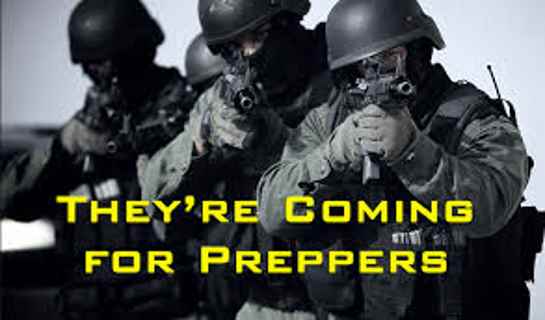 If you’re a fan of reality TV shows, you’ve probably caught at least an episode or two of Doomsday Preppers. It’s a show that follows these so-called “preppers” around with cameras, and documents how prepared they are for a potential disaster. You might be surprised to learn, there are over 3 MILLION Americans who consider themselves PREPPERS of one kind or another. Not all of them subscribe to the spooky sounding “Doomsday” theme. Many of them are just preparing for a power outage, natural disaster, terrorist attacks or economic turmoil.

In a corporate setting, they call this kind of thing “risk assessment,” “emergency preparedness” or “disaster recovery.” The very programs President Obama is calling for from companies and their DATA security. But when it comes to you and your personal home, some agencies in the federal government don’t believe you should have the same rights to stockpile important elements or prepare for a potential problem.

In a recent ruling, the EPA targeted families that use wood burning stoves. Not every PREPPER uses a wood burning stove, but many of them do. And the EPA says that could hurt the environment. Their recent demands say Older stoves that don’t meet certain standards cannot be traded in for updated types, but instead must be rendered inoperable, destroyed, or recycled as scrap metal.

But the federal government is targeting much more than just wood burning stoves. That’s just the tip of the proverbial iceberg. In a clear hypocritical 180, they’re also targeting any preppers who use clean, efficient energy. The cleanest kind of all. Completely off the energy grid, using innovative devices like compost toilets and self-sufficient water supply. A man in South Florida was ordered to reconnect to the power grid, or they would evict him from his home.

Another man in Oregon spent 30 days in jail a few years ago, because the local courts found him guilty of violating a 90-year old law that doesn’t allow you to set up an illegal water reservoir. That illegal method? Collecting rainwater and melting snow from his own roof.

RELATED : How to Avoid Being Captured If You Are On the Red List

In New York, state officials are dragging children out of the public schools, sending them home with a suspension letter. Why? Because their parents opted not to use vaccines. But with the education rates in the New York public school system, maybe they’re doing them a favor. Just don’t expect the state government to issue a refund on that property tax – the money that pays for their child to attend public school.

So it appears the feds want you to rely on them despite the fact that FEMA has failed miserably in recent history.

FEDS Are Now Coming After Preppers

Three North Carolina men fearing a government takeover and martial law stockpiled weapons, ammunition and tactical gear while attempting to rig home-made explosives, according to charges announced by the Justice Department on Monday.
The men from Gaston County, near Charlotte, were arrested by federal authorities on Saturday after more than a month’s investigation.
Walter Eugene Litteral, 50, Christopher James Barker, 41, and Christopher Todd Campbell, 30, are accused of stockpiling guns and ammunition, as well as attempting to manufacture pipe bombs and live grenades from military surplus “dummy” grenades, according unsealed criminal complaints released Monday.
The close to 60 pages of information compiled by federal authorities since July include allegations Litteral planned to makes explosives out of tennis balls covered in nails and coffee cans filled with ball bearings.
According to the documents, both Litteral and Campbell spoke openly about their opposition to Jade Helm 15, a series of ongoing special forces training missions in several Southwestern states that has drawn suspicion from residents who fear it is part of a planned military takeover.

RELATED : 10 Ways to Fool the Authorities and Escape Martial Law

RELATED : URGENT: Supreme Court Confirms ALL Americas Can Be Incarcerated In FEMA Concentration Camps… Obama Can Declare Martial Law In ALL 50 States!
Other useful resources: