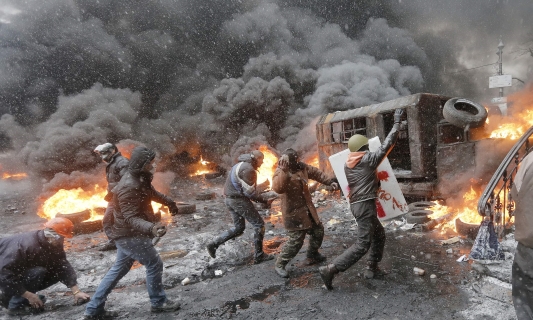 If you’ve ever wondered what Martial Law in America may look like, then this detailed report will be an eye opener. It explores the ramifications of our current economic and political climate, motivating factors that necessitate a lock-down of America by The-Powers-That-Be, the signs to look for before it happens, implementation, and your life once troops have been deployed.

America has gone from being annoyed with their government to the point of resisting their government. In my previous article, I have detailed how state governors, veterans, truckers and just average everyday citizens are resisting the tyrannical and egregious abrogation’s of the United States Constitution. The police state crackdown mechanisms are in place which are designed to break the back of any resistance to federal authority, legitimate or not.

The net effect of the establishment of “Police State America” is that it is designed to subjugate the populace and stamp out any remaining vestiges of Constitutional liberties and create a society where the state is all-powerful. With America’s new found spirit of civil liberty being expressed through acts of civil disobedience, martial law is being put into place. When one couples this undeniable fact with the fact that President Obama is under extreme pressure and is struggling to maintain control of the country, these measures are going to be rolled in a style reminiscent of the Shock and Awe style witnessed in Gulf War I.

Obama Is a Wounded Animal

Obama was clearly given a mandate by the central bankers to get the US in a war in the Middle East, first with Syria and Iran. This conflict was designed to temporarily preserve the Petrodollar which Iran is threatening by selling oil for gold to China, Russia and India. The powers that be were hoping that Russia and China would resist and any final resistance to a complete central banking takeover of the planet would be eliminated. Obama’s initiatives, designed to provoke a war with Syria, as a first step, were turned back. Obama has been publicly humiliated by Russian leader, Vladimir Putin.The world and specifically, the alternative media thwarted Obama and the central bankers on this front.

Richard Nixon was unable to survive one direct hit upon his administration, namely, the Watergate scandal. Conversely, Obama is facing five scandals which dwarfs Watergate in terms of criminality, abuse of power, malfeasance of office and outright treason. The damage inflicted upon the American people by the criminal syndicate occupying the White House, in American History, is unparalleled.

Last May the central bankers, through their corporate controlled press, released five Watergate type scandals in a brief 10 day period designed to force a reluctant President’s hand in the Middle East. America is outraged by (1) Benghazi-Gate; (2) IRS-Gate; (3) AP Spy-Gate; (4) Whistle-blower-Gate; and even (5) Fast and Furious made a second pass. The alternative media is being so effective that it is forcing the MSM to jump off Obama’s ship and claim they do not support him any longer (e.g. MSNBC Chris Mathews). These five events are real threats to this President remaining in office. Unable to get a war started in the Middle East, how can the President survive these five crises? He has no choice but to move from the soft forms of martial law to an all-out implementation of martial law if he wants to remain in power.(source)

Martial law is an extreme and rare measure used to control society during war or periods of civil unrest or chaos. According to the Supreme Court, the term martial law carries no precise meaning (Duncan v. Kahanamoku, 327 U.S. 304, 66 S. Ct. 606, 90 L. Ed. 688 [1946]). However, most declarations of martial law have some common features. Generally, the institution of martial law contemplates some use of military force. To a varying extent, depending on the martial law order, government military personnel have the authority to make and enforce civil and criminal laws. Certain civil liberties may be suspended, such as the right to be free from unreasonable searches and seizures, freedom of association, and freedom of movement. And the writ of habeas corpus may be suspended (this writ allows persons who are unlawfully imprisoned to gain freedom through a court proceeding).

Martial law on the national level may be declared by Congress or the president. Under Article I, Section 8, Clause 15, of the Constitution, Congress has the power “[t]o provide for calling forth the Militia to execute the Laws of the Union, suppress insurrections and repel Invasions.” Article II, Section 2, Clause 1, of the Constitution declares that “[t]he President shall be Commander in Chief of the Army and Navy of the United States, and of the Militia of the several States, when called into the actual Service of the United States.” Neither constitutional provision includes a direct reference to martial law. However, the Supreme Court has interpreted both to allow the declaration of martial law by the president or Congress. On the state level, a governor may declare martial law within her or his own state. The power to do so usually is granted in the state constitution.(source)

Alex Jones uncovers one of the most detrimental plans facing humanity today. In this SHOCKING Report Alex details the governments insidious plan to put it’s own citizens under martial law in order to strip them of all rights. Now the government is issuing subliminal propaganda via the Ad Council who claims it does not know how a news cast mentioning martial law in the midst of an outbreak ended up in an AARP ad.

Footage out of California shows armed National Guard troops patrolling residential streets and practicing traffic control.Helicopters and tanks “scare” residents in Texas ahead of the Jade Helm military exercises, and American protesters are referred to as “enemy forces” and “aversaries” in National Guard documents.