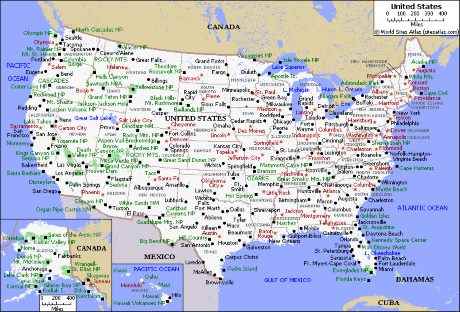 What is the best place to live in the United States?  I get asked that question all the time.  My answer can be summed up in two words: it depends.  The truth is that the answer is going to be different for each person.  All of us have different goals and different needs.  If you have a very strong network of family and friends where you live right now, you might want to think twice before moving hundreds or thousands of miles away.

RELATED : Strategic Relocation and How To Survive The Economic Collapse

If you have a great job where you live right now, you might want to hold on to it.  You should not just assume that you are going to be able to pick up and move to another part of the country and be able to get a similar job right away.  The United States is in the midst of a very serious economic decline right now, and wherever you live you are going to have to provide for your family.  Just because you move somewhere new does not mean that you are going to leave your problems behind.  In fact, you might find that they moved right along with you.  With all that being said, the reality is that there are some places in the U.S. that are going to be much more desirable than others when the economy totally falls apart.  For example, during a total economic collapse it will not be good to be living in a large city or in a densely populated area.  Just think about what happened in the aftermath of Hurricane Katrina.  If the entire nation is going through something like that, you don’t want to have hundreds of thousands of close neighbors at that point.  So when thinking about where you want to be when everything falls apart, population density should be a major factor.  But there are other factors as well and no area of the United States is perfect.

RELATED : If You Want To Survive The Economic Collapse-Read This

If you live in or near a major city right now, that is okay.  Most Americans do.  Even if you have limited financial resources at the moment, you can start developing a plan that will get you where you eventually want to go.  If you want to move to another part of the country you can start applying for jobs out there.  You can also be working hard to develop a business that would enable you to move.  Perhaps you have friends or family in more isolated areas that would allow you to stay with them during an economic collapse.

Those that possess more financial resources could start thinking about getting a second home in a location that is more rural.

The key is to come up with a plan and to be working towards accomplishing that plan.

If you don’t have a plan yet, hopefully the following information will give you something to think about.  Not all areas of the United States are equal, and all of them do have problems.

The following are some thoughts about the best place to live in the United States….

A major problem with the Northeast is that it is just so darn crowded.  Yes, there are some rural areas, but the overall population density of the region is so high that it would be really hard to go unnoticed for long in the event of a major economic collapse.

Another thing that is not great about the Northeast is that so much of the population lives near the coast.  As we saw in Japan recently, living near a coastline is not necessarily a good thing.  While it is likely safer to live along the east coast then the west coast, the truth is that there is an inherent level of insecurity when it comes to living in coastal areas.  You never know when the next hurricane, oil spill or tsunami is going to strike.

Also, the Northeast is really quite cold.  So staying warm and growing your own foodwould be more difficult than in some other areas of the country.

The Mid-Atlantic is one of the most beautiful areas of the nation.  Unfortunately, it suffers from many of the same problems that the Northeast does.

The Mid-Atlantic has a very high population density.  For example, the area around Washington D.C. is pretty much all suburbs for 50 miles in all directions.

The weather is nicer than in the Northeast and there are some less dense areas once you get south of Washington D.C.

If you think that the Mid-Atlantic might be for you, you might want to check out North Carolina or South Carolina.  The people tend to get friendlier the further south you go and there are definitely some areas that could potentially work.

Florida is generally not going to be a place that you want to be during an economic collapse.  The housing market has absolutely collapsed down there and the crime rate is already very high.  It is also very densely populated.

The weather is very nice down in Florida, but one big thing that you need to consider when it comes to Florida is the fact that it is very flat and most of Florida is just barely above sea level.  In fact, quite a bit of Florida is actually below sea level.

In addition, hurricanes are always a major threat in Florida.  It is a beautiful state, but there is a lot of risk to living down there.

RELATED : The Five Major Killers in a Disaster

There is a lot of poverty in that area of the country.  There is also a lot of crime.

There are a lot of great people who live down in the Southeast, but if you do not know your way around it can be a very difficult place to move to.

One of my favorite places east of the Mississippi River are the mountains along the Tennessee/North Carolina border.  If you must be in the eastern half of the United States, that is not a bad choice.

So if you want to live in the Mid-South, it is highly recommended that you stay far away from the New Madrid fault zone.

The Upper Midwest was once one of the great manufacturing regions of the world, but now much of it is known as the “rust belt”.

Formerly great manufacturing cities such as Detroit are now absolute hellholes.  Tens of thousands of our factories and millions of our jobs have been shipped overseas.

There are some really great people (including some good friends of this column) that live up there, but the truth is that the region is really cold and unemployment is rampant.

The Upper Midwest is an area that people want to get out of.  It is probably not a great place to move to.

However, if you do need a job, one place to look is a little bit west of there.  Thanks to an abundance of natural resources, unemployment in North Dakota and South Dakota is very low.  If you really need a job you might want to look into those two states.

In the Southwest there are a whole lot of freedom-loving Americans, the weather is very warm and there is a lot of space to get lost.

However, the Southwest is also very dry and in many areas there is not a lot of water.  Drought and wildfires are quite common.

In addition, illegal immigration is rampant and is a constant security threat.

If you are familiar with that area of the country it is not a bad choice, but if you do not know what you are doing it could end up being disastrous for you.

As long as you are far enough away from the New Madrid fault, the Great Plains is not a bad choice.

It is very, very flat out there, and it can be quite windy, but the good news is that you should be able to grow your own food.

In addition, the population density is generally very low in most areas.

One big negative, as we have seen recently, is tornadoes.  The United States experiences more tornadoes that anywhere else in the world, and “tornado alley” generally gets the worst of it.

During an economic collapse, the West Coast is not a place that you will really want to be.  Just take a look at the state of California already.  It is an economic nightmare.

Oregon is better, although they have very high taxes and they are experiencing huge economic problems right now as well.

The best area along the West Coast is the Seattle area, but you won’t want to be anywhere near a major population center when things totally fall apart.

Large numbers of freedom-loving Americans have been moving to the states of Montana, Idaho and Wyoming.  You can also throw eastern Washington and eastern Oregon into this category as well.

It gets cold up in the Northwest, but not as cold as the Upper Midwest.  There are lots of rivers, streams and lakes and in certain areas there is plenty of rain.

The population density is very low in most areas and there is an abundance of wildlife.  Housing prices are reasonable and in many areas you can grow your own food.

The Northwest is one of the favorite areas of the United States for preppers.  It is far from perfect, but it does have a lot of advantages.

RELATED : How to Survive The Collapse of Civilization

Neither Alaska or Hawaii is recommended.  Alaska lies along the “Ring of Fire” and it is very, very cold.  Also, almost everything has to be either shipped or flown into Alaska.  In the event of a real economic collapse, supplies to Alaska could be cut off and shortages could develop very quickly.

Hawaii has a huge population and it does not have a lot of room.  Like Alaska, most supplies have to be either shipped in or flown in.  And one really bad tsunami could pretty much wipe Hawaii out.

But once again, there is no “right answer”.  There are areas of just about every U.S. state that could potentially work well during a major economic collapse.

When assessing where “the best place to live in the United States” is, it is important to examine your own personal factors.  What will work for me and for my family will not necessarily work for you and your family.

So what do all of you think about this list?  Which area of the country do you think is best for those Americans who are seeking to prepare themselves for the coming economic collapse?(source)