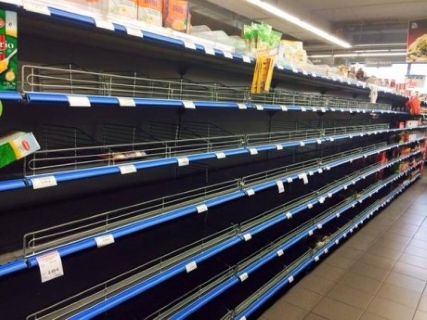 What you are watching unfold in Greece right now is eventually going to come to your own neighborhood.  Someday, people living all around you will be storming the supermarkets in a desperate attempt to secure the food and supplies that they neglected to store up when they had the chance.  Of course the Greeks never thought that it would happen to them either.  Their civilization had endured for thousands of years, and they were a part of the most powerful economic alliance on the face of the planet.  Most Greeks never imagined that they would be plunged into a multi-year economic depression that would ultimately lead to “bank holidays”, long lines at ATM machines, and people diving into dumpsters in a frantic search for something to sell.  And this is just the beginning of the chaos in Greece – things are going to get much, much worse for them.  Hopefully, this will serve as a wake up call for millions upon millions of clueless Americans out there, because we are on the exact same path that Greece has gone down.  The sad truth is that no amount of “American exceptionalism” is going to prevent us from suffering the consequences of decades of very foolish decisions.  We are steamrolling toward our own version of economic collapse, and when that time arrives you don’t want to be caught totally unprepared for it.

In some cities in the United States, it only takes an inch or two of snow during the winter to set off panic hoarding at local supermarkets and hardware stores.

So what is going to happen during a real crisis?

The Greek people are just like us.  They are proud, sophisticated people that are highly educated.  But now that a full-blown collapse of their economy is imminent, they are feverishly hoarding cash and food…

Greeks were hoarding cash and food Saturday amid mounting fears the economy could collapse, cracking open their wallets only to stock up on essentials and stripping supermarket shelves in the process.

Mothers, elderly men and university students were spotted pushing heavily overloaded trolleys or coming out of shops weighed down by bags of food, with essentials such as sugar, flour and pasta top of the list.

In the well-off area of Glyfada in Athens residents appeared to have panicked, thrusting everything from vast rolls of toilet paper to multiple packs of lentils into their carts.

If you do not believe that something like this could happen in the United States, you are being delusional.  And someday, we may actually experience a crisis in which the store shelves are emptied and they do not get resupplied.  What would you and your family do during such a scenario?  The following photo of what is happening in Greece right now comes from Twitter…

A colleague of mine send me this pic from a supermarket

Piled high with rubbish congealing in the summer heat, municipal dustbin R21 on Athens’ Sofokleous Street does not look or smell like a treasure trove.

But for Greece’s growing army of dustbin scavengers, its deposits of rubbish from nearby stores and grocery shops make it a regular point of call.

“Sometimes I’ll find scrap metal that I can sell, although if I see something that looks reasonably safe to eat, I’ll take it,” said Nikos Polonos, 55, as he sifted through R21’s contents on Tuesday morning. “Other times you might find paper, cans, and bottles that you can get money for if you take them back to the shops for recycling.”

But that could never happen in America, right?

After all, aren’t we “the greatest nation in the world”?

Sadly, what we experienced in 2008 was just a preview.  We have piled up the greatest mountain of debt in the history of the planet, our financial system has been transformed into a gigantic casino, and our leaders have been making some of the dumbest decisions imaginable for decades.

In the end, all of our foolishness is going to catch up with us in a big way.

But of course most Americans don’t want to believe it.  They want to believe that we will always be the biggest, baddest, most powerful nation on the entire globe.  The following are some actual comments that were left on some of my recent articles…

-“The dollar is not going to collapse. It is too big of a cog in the global order.”

-“We’re Americans! This could never happen to US.”

-“we will have a recession nothing more. Some people will see injustice from looters and some elderly will be meet their maker b/c no one will care to help anyone. But The recession will end and we will have a real recovery.”

-“There is no collapse coming, at least not in the U.S. There will be recessions and depressions, but the resiliency and the sheer economic power of this nation means there is no collapse in any reasonable time horizon. Doomsday prophets have a history of being wrong in the United States of America.”

-“C’mon guys look around. This is the best time to be alive ever. I believe in being prepared for what you can’t see coming, but the world is doing just fine. There’s no need to EXPECT some variation of a doomsday scenario. It’s highly improbable.”

Yes, there are a couple million Americans that are actively prepping, but for the most part it appears that most people still have a tremendous amount of faith in the system.  They arrogantly believe that we are just too smart, too powerful and too wealthy to ever fall.

But I am here to tell you that the greatest economic crisis in modern American history is imminent.  That is why the title of my new book is “Get Prepared NOW“.  On the cover of the book, the word “NOW” is in larger letters than everything else.  There is a reason for that.  I am not kidding when I say that you need to get prepared immediately.  If you wait, you are going to end up like the people rushing into the grocery stores at the last minute in Greece.

When it comes to preparation, it doesn’t have to be complicated.  Initially, it is good to focus on “the big five”…

During any major emergency, every single one of us is going to need a roof over our heads, food on the table, clean water to drink, a back up source of emergency power and a way to defend our families and our homes.

You would be surprised at how many Americans do not even have those basic things covered.  They just trust that Wal-Mart will always be open, that Obama has things under control, and that the federal government will swoop in and save them if some sort of emergency ever does happen.

To those that still trust in the system, I would urge you to look at what is happening in Greece.  A modern European nation is plunging into a full-blown economic collapse, and the same things that are happening over there will be happening over here someday.  It is just a matter of time.

So please, get prepared now, because time is running out.