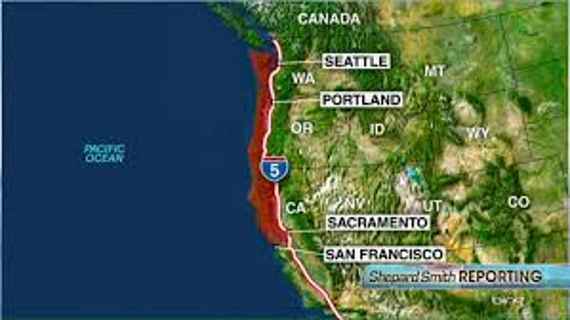 Nuclear Scientist is sounding the alarm of a coming “Mega-quake” with the potential to split North and South America generating Mega Tsunamis that could “strike America and Asia killing 40 million people” Tomorrow Friday October 16th America begins to prepare for such event as Drills are set to take place conducting “Dry Runs” of such event!

How We Know The Megaquake Is Coming

Over its 10,000-year rupture history, earthquakes around magnitude 9.0 occurred along the length of the Cascadia Subduction Zone 19 times — about every 526 years. The southern section of the CSZ has seen 19 additional quakes of 8.0 or higher.

Along this southern section, the average recurrence is every 234 years. With the last major event placed at 315 years ago, we’re due.

Seismologists say there’s a 37 percent chance a magnitude 8.0 or 9.0 earthquake could hit Oregon in the next 50 years. It’s hard to imagine the power of these earthquakes. So, let’s break it down with sand.

Cascadia fault line has lain dormant for 300 years
Eruption could trigger tsunami, devastating seaside communities – and reach as far as Japan
The north-west coast of the U.S. could be devastated by a huge movement of undersea plates known as a ‘megathrust’ earthquake, scientists say.
A review of the dangers posed by the Juan de Fuca plate released in the wake of the Japanese quake has raised fears that the Pacific seaboard could be similarly ravaged.
The horrifying possibilities have been brought to light by data researched by the Active Tectonics and Seafloor Mapping Laboratory at Oregon State University.
And the results are shown in a documentary, Megaquake: The Hour That Shook Japan, which is set to go out on the Discovery Channel in the UK this weekend.

RELATED : How to Bug-In: What You Need to Know to Survive a Grid-Down Disaster

The first sign that the Cascadia earthquake has begun will be a compressional wave, radiating outward from the fault line. Compressional waves are fast-moving, high-frequency waves, audible to dogs and certain other animals but experienced by humans only as a sudden jolt. They are not very harmful, but they are potentially very useful, since they travel fast enough to be detected by sensors thirty to ninety seconds ahead of other seismic waves. That is enough time for earthquake early-warning systems, such as those in use throughout Japan, to automatically perform a variety of lifesaving functions: shutting down railways and power plants, opening elevators and firehouse doors, alerting hospitals to halt surgeries, and triggering alarms so that the general public can take cover. The Pacific Northwest has no early-warning system. When the Cascadia earthquake begins, there will be, instead, a cacophony of barking dogs and a long, suspended, what-was-that moment before the surface waves arrive. Surface waves are slower, lower-frequency waves that move the ground both up and down and side to side: the shaking, starting in earnest.

RELATED : Build your own Underground Bunker