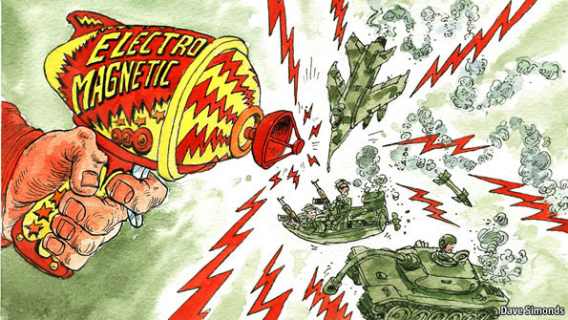 Warfare is changing as weapons that destroy electronics, not people, are deployed on the field of battle

BULLETS and bombs are so 20th-century. The wars of the 21st will be dominated by ray guns. That, at least, is the vision of a band of military technologists who are building weapons that work by zapping the enemy’s electronics, rather than blowing him to bits. The result could be conflict that is less bloody, yet more effective, than what is now seen as conventional battle.

Electromagnetic weapons, to give these ray guns their proper name, are inspired by the cold-war idea of using the radio-frequency energy released by an atom bomb exploded high in the atmosphere to burn out an enemy’s electrical grid, telephone network and possibly even the wiring of his motor vehicles, by inducing a sudden surge of electricity in the cables that run these things.
That idea, fortunately, was never tried in earnest (though some tests were carried out). But, by thinking smaller, military planners have developed weapons that use a similar principle, without the need for a nuclear explosion. Instead, they create their electromagnetic pulses with magnetrons, the microwave generators at the hearts of radar sets (and also of microwave ovens). The result is kit that can take down enemy missiles and aircraft, stop tanks in their tracks and bring speedboats to a halt. It can also scare away soldiers without actually killing them.

Many electromagnetic weapons do, indeed, look like radars, at least to non-expert eyes. America’s air force is developing a range of them based on a type of radar called an active electronically scanned array (AESA). When acting as a normal radar, an AESA broadcasts its microwaves over a wide area. At the touch of a button, however, all of its energy can be focused onto a single point. If that point coincides with an incoming missile or aircraft, the target’s electronics will be zapped.

Small AESAs—those light enough to fit on a plane such as a joint strike fighter (F-35)—are probably restricted to zapping air-to-air and surface-to-air missiles (the air force is understandably reticent about supplying details of their capabilities). Ground- or ship-based kit can draw more power. This will be able to attack both ballistic missiles and aircraft, whose electronics tend to be better shielded.

In the case of the F-35, then, this sort of electromagnetic artillery is mainly defensive. But another plane, the Boeing Growler, uses electromagnetics as offensive weapons. The Growler, which first saw action in Iraq in 2010 and has been extensively (though discreetly) deployed during the NATO air war against Colonel Qaddafi’s forces in Libya, is a souped-up version of the Super Hornet. It is fitted with five pods: two under each wing and one under the fuselage. Some pods contain AESAs or similar electromagnetic weapons. Others have eavesdropping equipment inside them. In combination, the pods can be used either to spy on enemy communications or to destroy them; to suppress anti-aircraft fire; to disable the electronics of ground vehicles; and to make life so hazardous for enemy aircraft that they dare not fly (and probably to shoot them down electronically, too, though no one will confirm this). The Growler is able to keep its weapons charged up and humming by lowering special turbines into the airstream that rushes past the plane when it is flying. America has ordered 114 of the planes, and has taken delivery of 53.

Imagine the future – a strange new weapon is detonated high over a large city. There is no explosion, no visible destruction, but everything electronic within the range of this weapon will go out…permanently.
Every electronic gadget in every home and office – disabled. No computers, no T.V., no life support systems in hospitals, no water supply, no heat, no lights – truly, a return to the dark ages. Imagine a full range of new weapons; one can take out the electricity in your city, another can destroy you.
If you haven’t heard about these weapons, it’s no surprise. Their development has been secretive and they sound more like science fiction than reality. When did this reality really begin and how far advanced is it now?
This revealing documentary opens the window on this -until now- secretive science.