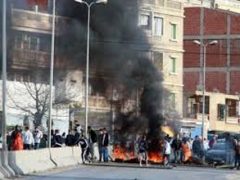 Jim Willie say it all in the first 5 minutes of this interview. Just look around, the world is proclaiming that the U.S. Dollar is the problem for the world… Read more »