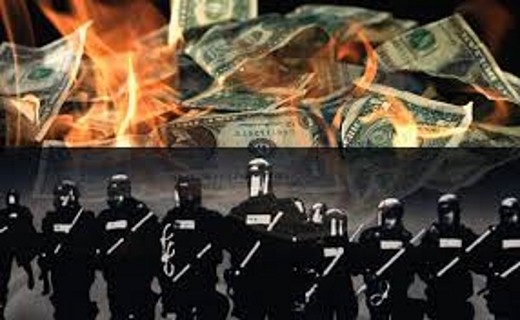 “Wake Up” September 2015 is going to be the biggest month in world history. It is almost upon us, this Doco will give you AWESOME insight to what is happening.
Something very Big is about to happen that will change the world.
I Believe we are in a time where the Bible will come to an end.
Disasters, War, Rising of Corrupt Leaders, Diseases, Poverty, Hatred, Famines are becoming more increasing and Intensifying than ever before, things are going from bad to worse and there has to come a time when this all has to come to an end.

1. CERN  (Playing with the God Particle)
CERN is largely credited for birthing the World Wide Web and is also involved in highly advanced scientific experiments, one of which includes the Large Hadron Collider (LHC).

The LHC is located 300 feet below ground and is the world’s largest particle collider. It is also the single largest machine in the world, spanning over 17 circular miles within two sovereign nations. When activated, a ring of superconducting magnets send proton particles in motion at breakneck speed, just shy of the speed of light, then ultimately smashes them together.

The initial goal of CERN via the LHC was to discover the “God Particle” and help researchers better understand the origins of our universe by replicating the “big bang” through the isolation of unseen forces that hold everything together (anti-matter and dark matter).

While most assume CERN’s activities are strictly scientific in nature, there is overwhelming evidence that the organization and its LHC are integrating the spiritual realm and the occult into their research.(source)

A major part of the LHC complex is situated in Saint-Genis-Pouilly. It was previously called Pouilly-Saint-Genis. If you go back a bit further both towns were identified separately and probably derived its name in Roman times called Apolliacum, the town, and a temple being dedicated to Apollyon, which is Greek. CERN just happens to be positioned precisely to where the ancient city of Apollyon situated during Roman times.

Apollyon in Hebrew is Abaddon (Ǎḇaddōn), and it appears in the Hebrew Bible as ‫אֲבַדּוֹן both a place of destruction and as the name of an angel. Abaddon refers to a bottomless pit, often appearing alongside the place שאול   (Sheol) meaning the realm of the dead. CERN sits over the ancient bottomless pit, where CERN is the key to opening the bottomless pit.

In the New Testament, the Book of Revelation, an angel called Abaddon described as the king of an army of locusts. His name transcribed in Greek is (Revelation 9:11—”whose name in Hebrew is Abaddon” (Ἀβαδδὼν)), and then translated (“which in Greek means the Destroyer” (Ἀπολλύων, Apollyon)).”

Apollo is related to sun worship, the Black Sun societies, the Vrille societies from WWII, the Black Swastika, and Saturn. One other interesting thing to note is that at CERN there are no pits, except for one underground facility named Pit 8. The number 8 in numerology relates to Saturn. Within one of the podcasts, there was the mentioning of the film, “As about, so below.” The film mentioned the Gates of Hell from ancient mythology, which began at 741 feet below ground. According to one website the Gates of Hell at CERN, start at 568 feet below ground.

CERN is also short for CERNunnos, the god of the underworld. According to Dr. Anthony Patch, “The Horned One” is a Celtic god of fertility, life, animals, wealth, and the underworld. He was worshiped all over Gaul, and his cult spread into Britain as well. Cernunnos depicted with the antlers of a stag, sometimes carries a purse filled with coin. The Horned God is born at the winter solstice, marries the goddess at Beltane, and dies at the summer solstice. He alternates with the goddess of the moon in ruling over life and death, continuing the cycle of death, rebirth, and reincarnation.” The god Cernunnos has two rings, one on each horn. There we have the rings of Saturn, the rings of the Hadron Collider, and the rings on Cernunnos.

What’s interesting is the similarities of these god’s divine purposes between the Celtic god Cernunnos and the Hindu God, Shiva, notably Nataraja.

The Hindu God, Shiva meaning “The Auspicious One” also known, as the Destroyer “or” the Transformer, is one of the main deities in Hinduism. A statute of Shiva, but more accurately Nataja is located right outside the headquarters of CERN. “Nataraja (Tamil:”நடராசர்” or Kooththan”கூத்தன்:), The Lord (or King) of Dance). It is a depiction of the Hindu God Shiva as the cosmic dancer who performs his divine dance to destroy a weary universe and make preparations for the god Brahma to start the process of creation.” At the highest level, Shiva is regarded as limitless, transcendent, unchanging and formless.

The god Shiva is involved in three states. The first state is destruction; the second state is desolation, and the last state rebirth. What’s interesting is that if you sliced open one of the detectors, CMS from an end view, it looks like a replication of the god Shiva.(source)

The Shemitah ends and September 23rd is the Convergence. Have you heard about the several global catastrophes that are supposedly going to happen this fall? Have you heard about Jade Helm? Or C.E.R.N? Why is the Pope making a historic appearance to the U.S. Capitol to address Congress in September? Do you think it’s strange that all of these events happen to “converge” right at the end of the Shemitah cycle—right when some prophecy teachers are predicting a financial collapse?

RELATED : Shemitah 2015 with Jonathan Cahn | What You Need To Know!

September 23, 24, 25 the Pope is scheduled to meet with President Obama, the U.S. Congress, then the United Nations. The agenda is that he will speak on several issues, such as environmental impact and climate control. However, insiders suggest he will push the New World Order agenda and bless the new general assembly of the UN, in which the 70th convenes. A new direction will be drafted, which may include the NWO.

The heavens will witness the fourth of a series of Blood Moons. Each has landed on a Jewish feast, and this on on September 28th will land on the Jewish Feast of Tabernacles. Earlier in September a Partial Solar Eclipse will occur. And rumor that an asteroid will come uncomfortably close to the earth’s orbit, some people expecting impact. NASA denies such scare.

The Large Hardon Collider machine, called CERN, will restart by this time. CERN has been designed to accelerate protons and manipulate matter, producing a big bang effect, pulling out antimatter, and examining the “glue” that holds matter together. The biggest concern is the plan to open up a portal into another dimension. Some scientists are skeptical, others warning of the consequence of man tampering with nature where it is not appointed for man to explore. Some have warned that this will possibly open up an abyss to a demonic realm. Revelation 9 speaks of Abaddon, or Apollos, who is given the keys to the bottomless pit. The destroyer will release the demons chained up. It is no coincidence that the machine is decorated to liken the Hindu god Shiva, the destroyer. The entrance of the CERN facility also holds a statue in tribute to Shiva. There is spiritual significance to this operation, and to the climax surrounding September 2015.

5. Shemitah (The mind blowing Mystery of the Shemitah)

If Daniel’s “Seventy Sevens” prophecy is interpreted according to the Shemitah, this means that the seventh Jewish Sabbatical year (Sept 23, 2014-Sept 13, 2015) since Israel regained Jerusalem should be the year of the Antichrist’s covenant.